What's the white thing which corrects text called in English?

What's the thing which correct text by white fluid applying called in English?

The dictionary in my native language says it's called: correcting fluid, or white-out, but in fact my classmates call it 'corrector' (as it's called in the eastern Europe countries: Russian, Ukraine, Belarus, Polish, and many other languages such as: Spanish, Bulgarian etc.). Is it wrong? 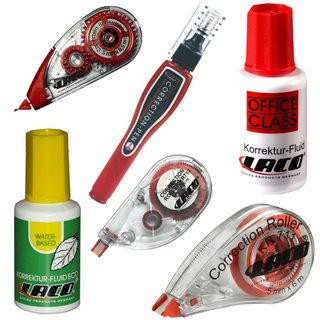 It's correction fluid or tape.

Wite Out, Liquid Paper & Tipp-Ex are all brand names, though they tend to be used as generic descriptions too, like Hoover is used for vacuum cleaners.

What things are called is highly dependent on locale. Even within the U.S. there is considerable variation in terminology for everyday items,

In North America, the image you provide depicts bottles of correction fluid as well as correction tape and a correction pen. I have never heard correcting fluid or corrector, but they could be in use in other parts of the world.

correction fluid mass noun An opaque liquid painted over a typed or written error so as to allow for the insertion of the correct character. [Oxford Living Dictionaries]

White-out is also common in North America, likely a genericization of Wite-Out, which is a BIC brand of correction fluid. By the same token, Tipp-Ex may be used in Europe, though no one on this side of the Atlantic has ever heard of it.

Yes, its called all those things: "correction fluid" and "white-out" are probably the most common but "corrector" is also reasonable, in context. It is also often called by one of the brand names "Tippex" and "liquid paper" are possible.

Remove any correction tape or correction fluid (e.g. tippex) from your pencil case as you cannot take these into an exam. (Birmingham University exam regulations)

Not the answer you're looking for? Browse other questions tagged terminology image-identification .