Why is "too" used in this negative sentence?

This is a news headline on CNN.

I was targeted during Nixon's administration. Trump shouldn't make an enemies list, too.

Why do they use "too", instead of " either" here? Isn't it a grammatical error? 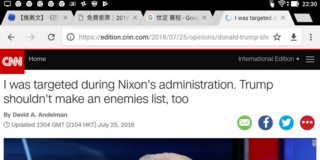 Trump should not make an enemies list as Nixon did.

This is a perfectly idiomatic colloquial English statement. The placement of too can create ambiguities, but context usually clears them up.

The statement means "Trump, now, should not be doing the same thing himself".

Suppose someone asked the same question yesterday, and now today you're asking it. One could say:

This question was asked and answered yesterday. You shouldn't be asking the question too.

P.S. either instead of too there would say that neither Nixon nor Trump should have engaged in the practice. too does not entail anything untoward about Nixon, just as in my last example with too there's no critique of the person who asked the question yesterday.

Not the answer you're looking for? Browse other questions tagged grammar adverbs negation .

1
What does "unplugged" mean or imply in this headline?

6
Why are both “when” and “once” used in “... when it was once broken”?
1
The usage of adjectives and adverbs
3
Usage of "very" in passive constructions
0
Be + adverb sentences
0
How do I form question tags for these examples?
1
Can we treat mankind as a plural noun?
0
"Noun to verb" and "Noun that verb"?
0
Usage Too, As well and Also in negative sentences
0
Grammatical structure of this sentence