What does "Candygram" mean? 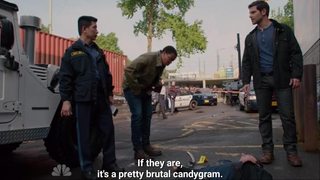 Candygram? What does it mean? I read this entry, but it didn't make sense.

Candygram
candy that can be ordered by wire for delivery with an accompanying message, as on the recipient's birthday or anniversary.

The caption on the image says:

A: Assault happened sometime after they closed, a little after 2:00. Bodyguard Luis Lopez was hit first. Frankie Adkins, he's the owner of the bar, he was hit next. We ID'd the body as Isaac Proctor.

A: Isaac is the son of cirminal defense attorney Amanda Proctor.

B: I dealt with her. She's kept a lot of bad people on the street.

C: So someone kills her son. Is someone trying to send a message?

A: If they are, it's a pretty brutal candygram.

B: Sword. It's pretty old-school.

Candygram a derived form of the word telegram, where the suffix -gram means "sent from someone else".

in nouns, denoting something written or recorded (especially in a certain way):
cryptogram | heliogram.

However, at least informally, the suffix -gram has come to be used by companies that deliver things other than messages, presumably because candygram sounded more catchy than telecandy. Other quaint forms I've heard include pajamagram, a website that lets you order pajamas online and send them to someone else as a gift. There are websites called flowergram and candygram as well, and kissograms have been around for some time. 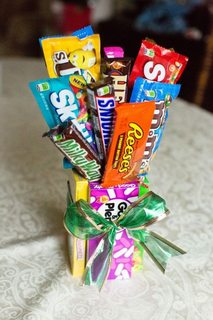 That explains what a candygram is. In the crime drama you are citing, a pun is being made on the phrase "send a message.â€ť In the criminal underworld, when we send a message to someone, that means we are warning them about something we don't appreciate, often under a threat or act of violence. (As an example, there's the famous horse head scene in the movie The Godfather.)

The other makes a grim joke, because one way to send a message (like a nice message, to a close friend) is a Candygram. He may have just as well said, â€śIf so, itâ€™s a pretty brutal message indeed,â€ť but I assume the writers thought the use of the word â€śCandygramâ€ť would make the dialogue seem more clever. This sort of verbal exchange is not uncommon on television crime shows.

Not the answer you're looking for? Browse other questions tagged meaning word-meaning .