Help to understand “a 'bullseye' on his chest”

I saw the sentence from this article. I think it's a figurative speech. My big guess would be that John Brennan put himself on the spot where he could receive some potential (verbal) attacks from Trump supporters, after he put those comments on Donald Trump. But I am not sure if I get it right.

Is it a common metaphor?

The centre of the target in sports such as archery, shooting, and darts. 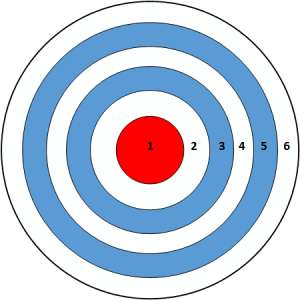 The expression is often used metaphorically to suggest a precise goal or purpose.

In your sentence it refers to the fact that Former CIA director has become a “target” of possible attacks because of his comments on President Trump.

Yes, it's a common metaphor and it takes its place among several others in the same theme:

He has a target on his back.
He is in the crosshairs.
He is in the line of fire.
He is an easy target.
He is easy prey.
He is a sitting duck.

They are all related to hunting and indicate that somebody is noticeable and vulnerable to attack.

Update: Comments have said that a bull's-eye is not related to hunting, but this is all metaphorical anyway. A bull's-eye is not used in hunting, and would normally never be put on somebody's chest. But if I did put one on somebody's chest and then let them "run away," it's only purpose could be for me to both locate them easily once I started looking for them and then to use it as a target.

An early movie that depicted the hunting of humans for sport was the 1932 The Most Dangerous Game. The theme has continued since then.

Not the answer you're looking for? Browse other questions tagged meaning-in-context phrase-meaning metaphors or ask your own question.