Why does the phrase "cross my fingers' mean just "cross middle finger over index finger"?

Originally, I thought "cross my fingers' would mean something like this picture shows: 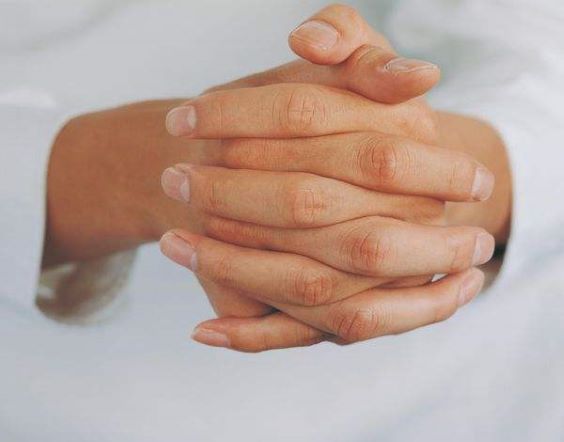 But by a search for the phrase "cross my fingers images" on the web, I get most of pictures like this: 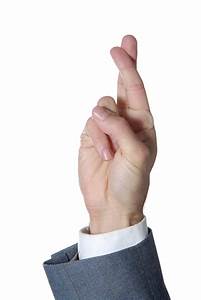 To cross one's fingers is a phrase going all the way back to ancient Israel and the Hebrew Bible, a gesture used by Jewish judges. This gesture was later adopted by the Christians who saw the symbolism of the Christian cross in it. It means the person crossing their index and middle fingers is praying for good luck, hoping something good or something they wish for will happen.

The first picture you include in your question can be described as, "lace one's fingers" or "interlaced fingers".

She laced her fingers.

He rests his hands on the table, fingers interlaced.

Some also call it "folding/folded hands". However, "to fold one's hands" is ambiguous, and can be interpreted differently by different people.

People cross their fingers when they hope for a favorable outcome or wish for good luck. Wikipedia has

To cross one's fingers is a hand gesture commonly used to wish for luck. Occasionally it is interpreted as an attempt to implore God for protection. The gesture is referred to by the common expressions "cross your fingers", "keep your fingers crossed", or just "fingers crossed".

Some people, mostly children, also use the gesture to excuse their telling of a white lie. By extension, a similar belief is that crossing one's fingers invalidates a promise being made.

There are probably few different ways to describe the version with the hands. I think the most common way to say this (at least in AmE) might be folding your hands, though I might be forgetting one.

To add to the existing answers: "clasping one's hands" is also an acceptable description of your first picture (although it might also refer to different gestures involving holding one hand in the other).

And crossed fingers, in addition to being a good luck gesture, can also (usually jokingly) refer to lying - kids would cross their fingers behind their backs when telling a lie or making a promise they don't intend to keep.

In addition to what the other answers said:

The definition of "cross" applicable here would be "intersect", as in the meeting of two things stretching in different directions.

This is clearly what's happening in the second image, where the index finger can be seen passing from one side to the other side of the middle finger, thus the two fingers cross at some point in the middle.

For the first image, the fingers are mostly parallel rather than "crossing".

Of course these aren't hard and fast rules - there can certainly be some crossing going on when folding one's hands / lacing one's fingers, or not so much crossing when crossing one's fingers, even when you just look at it from a different angle, but this is the basic idea.

"Cross your fingers" refers to to this specific gesture because it is traditionally a sign of good luck. Some may interpret this as making the sign of the Cross, from Christianity, but now it typically does not have any religious connotation. "Cross your fingers" is a common phrase someone might make before doing something risky.

The right phrase for the first gesture you show is "folding one's hands", at least in American English.

Not the answer you're looking for? Browse other questions tagged phrase-request etymology .

5
Why does 'disposed' mean 'inclined'?
1
"Funny": origin and evolution of the peculiar side of things?
2
Describing the position of elements of a web page
0
A word or phrase to describe a voiced guess
27
How can I describe being temporarily stupid?
1
how to express this position in English: "to put your feet up"?
1
Why is the phrase parent-in-law and not parent-by-law?
0
Where does the phrase "I'm so shook/shocked/shaken" come from?
1
What's the adjective/phrase to describe a romantic novel or TV show that has a detailed description of the (change of) emotion?