What do we call it when someone rides a bicycle or a motorcycle and suddenly stands on only one wheel (usually on the back wheel) for a short period? 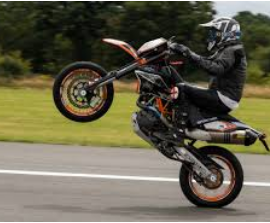 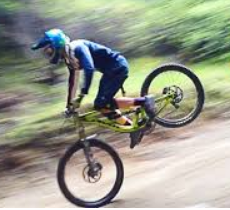 This trick is called a wheelie:

A trick or manoeuvre whereby a bicycle or motorcycle is ridden for a short distance with the front wheel raised off the ground.

A boy cavorted around on a dirt bike doing wheelies.

Here's a picture of a motorcyclist performing a wheelie: 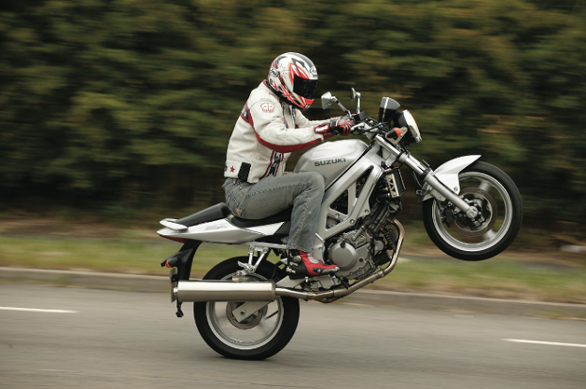 And riding on the front wheel, apart from being called a stoppie, can also be referred to as a nose wheelie. This was suggested by the user Matt Menzenski in the comments section. 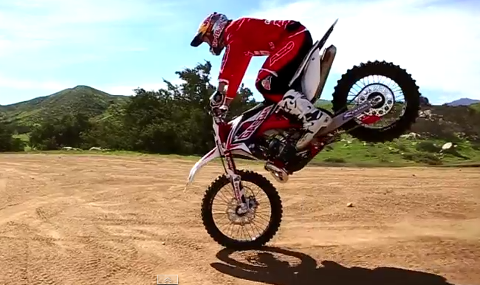 You can also use the verb phrase in the plural if you're doing the stunt multiple times.

Wiktionary lists these nouns for a wheelie on the front wheel

I'd recommend reading the Wikipedia page, too, because that shows a whole vocabulary of technical distinctions that I never imagined. Most fun you can have on your computer.

In addition to the various terms already given, mountain bikers refer to this as a manual (see, e.g., British Cycling, REI, Red Bull). "Manual" can also be used as a verb.

The person is doing a "Wheelie"

Perhaps out of date, but:

Doing a mono, or
Mono-ing

Mono being a prefix meaning "one" or "single", eg monopod - a camera support having just one foot (mono=one pod=foot) - c.f. a tripod

In Australia you are 'doing (or pulling) a mono'. Interestingly, the meaning of 'wheelie' now depends on whether you are on a bike or in a car. It used to be that if you got the front end of a car in the air it was a 'wheelie' (short for wheel stand), but this required tremendous amounts of power. 'Wheelie' eventually came to mean spinning the rear wheels- something much tamer. On a bicycle, however, you can still do a legitimate, old-style wheelie, or mono.

When talking about the trick in BMX for example:

Manual, a bicycle technique similar to a wheelie, but without the use of pedal torque.

2
Any word/phrase for 'what one says' and 'actually does'?
22
What do we call the small towel that we use only for hands
0
Antonym for "luxurious laziness"
2
A phrase for "using a word repeatedly"
1
a word/phrase for something that is very obvious
2
What do you call a film sequence where a lot of scene changes happen rapidly one after another?
2
A verb to convey "taking no notice to something for awhile"
0
What do you call the entire mechanical system that makes a bicycle rotate?
0
What is the correct word for someone rotating into a rotation?
0
Performing movements/motions in order to show-off or attract audience