What's the correct frequently-used word/phrase to describe the whole 'bullet'?

Though the word "bullet" is often used incorrectly in colloquial language to refer to a cartridge round, a bullet is not a cartridge but rather a component of one.[5] A round of ammunition cartridge is a combination package of the bullet (which is the projectile),[6] the case (which holds everything together), the propellant (which provide majority of the energy to launch the projectile) and the primer (which ignites the propellant). This use of the term "bullet" when intending to describe a cartridge often leads to confusion when the components of a cartridge are specifically referred to. 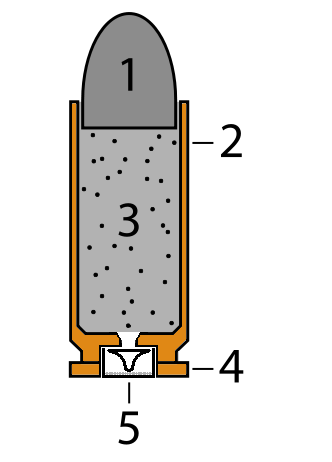 According to this Wiki article, the word bullet only refers to part 1. The whole is called "a cartridge round" or "A round of ammunition cartridge". But those terms sound more technical and I guess they probably would not be used in day-to-day conversations.

The entire thing is called a cartridge or a round. For example,

The 1920s are long gone but the performance of the .38 Super still holds up, delivering more speed than other handgun cartridges...

They are not particularly technical terms and are certainly used in day-to-day conversation by people who care about precision. They are definitely the correct, unambiguous terms to use. But other people have said, laypeople often use the term bullet to refer to the entire thing, although technically the bullet is only part 1 in the diagram, as you found.

Cartridge round seems to be mostly an older term and is not really used much anymore, and it sounds very "wordy". Round of ammunition cartridge just sounds plain wrong. The only place you might see that is in a technical description like "...the trainees were issued the one round of ammunition, Cartridge, Rifle, Cal. .30, AntiPersonnel, w/168 grain projectile...", but that's a very wordy, precise, military-style description that essentially says "a round of ammunition, of the style cartridge, of the caliber 0.30 inches, etc."