under cover of pinkness?

What does "pinkness" mean in the following?

Something significant happened under cover of pinkness while we were busy agonising over Scotland and Ed Miliband's dodgy memory. The Financial Times emerged redesigned: new type, new column widths, new colour graphics. What's significant about that, you say?

The Guardian: They used to say 'print or digital'. But do we need to choose?

I'd appreciate your help.

It's referring to the color pink: the quality or state of being pink. The Financial Times uses pink on its website and prints on pink paper. From Wikipedia

On 2 January 1893 the FT began printing on light salmon-pink paper to distinguish it from the similarly named Financial News: at the time it was also cheaper to print on unbleached paper (several other more general newspapers such as The Sporting Times had the same policy), but nowadays it is more expensive as the paper has to be dyed specially. 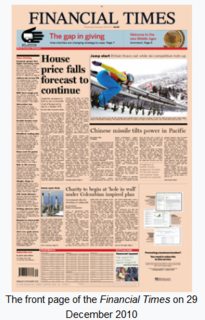 It's also a play on the phrase under the cover of darkness:

Instead of suggesting that something was done secretly under "darkness", the author used "pinkness" as a reference to their usage of pink.

The newspaper article is dated September 2014.

As well as the main reference to the Financial Times as described in Em's answer, there are other references to UK politics.

The political colour of the Labour party is red, and "pink" therefore implies weak or badly-thought-out left-wing policies or actions.

The Scottish referendum on independence was held in September 2014. The Labour party had been a strong supporter of Scottish devolution since the 1920s.

In 1998, the UK Labour government passed the Scotland Act which created the devolved Scottish Parliament, ironically giving the Scottish National Party a platform to build its power base at the expense of Labour. (And in the 2015 UK General Election a year after the independence referendum, the Labour party was wiped out in Scotland, with the Scottish Nationalist Party winning 56 out of 59 seats.)

In the 2014 referendum some prominent Labour politicians supported the "No" campaign. That culminated in Ed Milliband, the Labour leader, being branded "a ****ing liar and a traitor" the eve of the election by the "Yes" campaign, and being forced to abandon his campaigning activities for a "No" vote on the day before the election.

The Guardian newspaper supports left-wing policies, so its readership base would no doubt have understood this sub-text.

2
What does “under the PM” mean?
2
Put Under Investigation
2
Meaning Of “Under”
1
“Under no obligation” usage
0
“Under no circumstances” and “as” usage
1
What does “former” mean under this context?
1
What period does in the last 2 hours cover?
1
Meaning of “under study”
2
Peering under the hood?
0
What is mean “cover grammar”