Does “fastener” include “screw”?

1. A device, such as a clip, pin, or clasp, that attaches something firmly to something else.

2. A device, such as a seat belt, that secures a person or object.

I am not sure whether a screw is included in a fastener. Is there another word that covers a screw?

Yes, screws are included in the definition of fasteners: 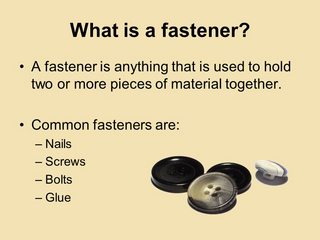 A screw definitely falls under the "fastener" umbrella. From Wikipedia:

Fastenal first sold mostly fasteners such as screws, threaded rods, and nuts, which are used in construction and manufacturing.

Note: Fastenal is a North American distributing company that happens to have the verb fasten as part of its company name.

I agree that a screw is a kind of fastener. However, when I think of a fastener, I don't think of a screw. Here's what the OALD has on the matter:

fastener noun
(also fastening)
a device, such as a button or a zip / zipper, used to close a piece of clothing; a device used to close a window, suitcase, etc. tightly
• buttons, zippers and other fasteners 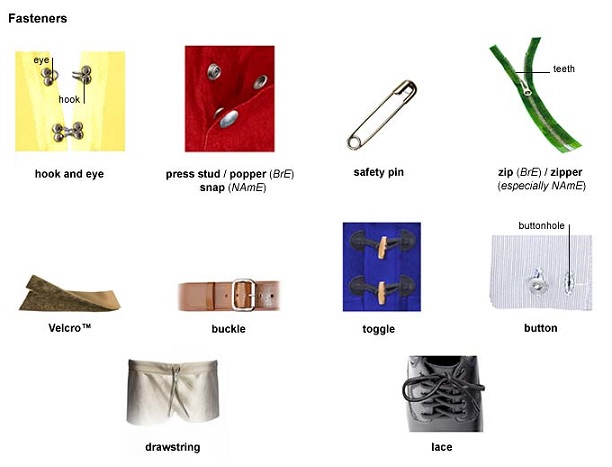 These were all more likely to be a fastener in my mind than a screw. To me, these are everyday items. However, it seems like the item that comes to mind will depend on the industry in which the fastener is used. For example, the kind of fastener you think of might differ if you're working on arts and craft, or shopping at IKEA or Screwfix.

My point is this: you can call a screw a fastener, but it might be good to clarify. If the context clearly indicates that you are talking about screws, or if screws were mentioned previously, then I don't think there should be a problem using "fasteners". If this is not the case, then you might want to say something like

The OP provides a good definition from a reliable dictionary.

Generally, a screw is not viewed as a fastener though you can fasten something to something with a screw.

American Heritage Dictionary as cited by the OP.

1. A device, such as a clip, pin, or clasp, that attaches something firmly to something else.

The reason the dictionary does not include screw is that a screw is not a fastener. However, the verb can be used with the noun screw: He fastened the board to the table with a screw, not nails.

Paper clips, clasp, pins, clips, buttons, zippers, and buckles are fasteners, to name a few. Nails and screws are not fasteners, but they can fasten (verb) things to things.

To fasten: to make something fast (older English) or attach or secure (modern English) something to something.

In every day language, a screw is not a fastener.

The word is define in American and British English as:

screw noun (METAL OBJECT) ​ [ C ] a thin, pointed piece of metal with a raised edge twisting round along its length and a flat top with a cut in it, used to join things together, especially pieces of wood.

: a simple machine of the inclined plane type consisting of a spirally grooved solid cylinder and a correspondingly grooved hollow cylinder into which it fits b : a nail-shaped or rod-shaped piece with a spiral groove and a slotted or recessed head designed to be inserted into material by rotating (as with a screwdriver) and used for fastening pieces of solid material together

A short, slender, sharp-pointed metal pin with a raised helical thread running round it and a slotted head, used to join things together by being rotated so that it pierces wood or other material and is held tightly in place.

None of these formal,reputable and online dictionaries define as screw as a fastener.

Not the answer you're looking for? Browse other questions tagged word-usage phrase-meaning word-request nouns or ask your own question.

1
Does “by 2014” include the year of 2014, or not?
3
The complex will include facilities for the __ of liquefied natural gas
1
Alternative for 'delay' term in case count - not time - does matter
9
In “led them”, does 'them' include the leader himself?
0
Does “calling” include “trade and industry”?
1
Does the definition and usage of 'booze' include wine and beer? Does it depend on the geography?
0
Does “tech” include non-computer technology?
2
A fence of steel or iron bars - does it have a name?
0
What is the most frequently used name for hook-and-loop fastener in daily life?