What does “Hey! quit shoving!” mean?

He rushed past her like a football tackle, bumping her. "Hey, quit shoving!" she said, closing the door behind them. Source: a James Thurber short tale

I would like to know what it means generally and in this context.

In the text the women says this to the man who has passed her swiftly. It happened quickly and something like the following picture has not happened.I have checked dictionaries before posting this question. What makes a question is that we usually tell someone "quit doing something" when they are doing it not just once in a moment.

Found this nice pic on it: 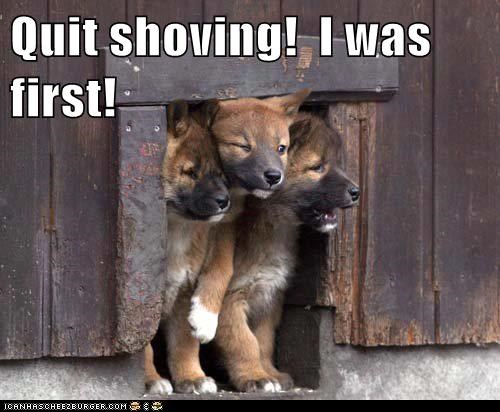 Idiomatically, it's perfectly normal in some contexts to use the imperative "Quit/Stop [doing something]!" even after the other person has already done whatever you're complaining about. The important thing is there just has to be at least some possibility that they might do it again.

In OP's citation, Mrs. Barrows (the speaker) is obviously slightly caught off guard - all she knows is she's just been rudely jostled - she's not quite sure what's going on (maybe there might be further roughness).

Another possible context - mother and teenage daughter have just had an argument; daughter flounces out of the house, slamming the front door as she leaves. Mother shouts after her...

To "explain" that one you have to assume the mother is to at least some degree railing against her daughter's habitual behaviour (if she's done it before, she might be going to do it again at some time).