What do “fridge door gives itself away” mean in this context? 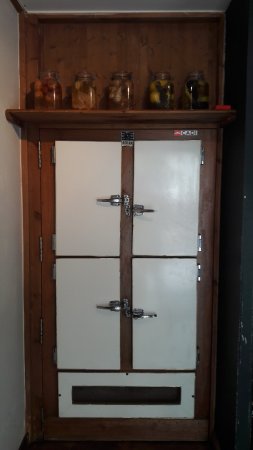 If you open the wooden fridge door, which takes up half a wall and gives itself away a bit thanks to its hinges, you'll be transported into El Paradiso – a speakeasy that's not just any cocktail bar.

To "give oneself away" is an idiomatic phrase meaning to unintentionally reveal, by carelessness or accident, that one is lying or concealing something. The four leftmost hinges visible in the picture, which belong to a wooden door, reveal, to an alert observer, that the refrigerator is larger than the four small white doors might suggest.

"Richard Burton, [the 19th century explorer, not the 1950s & 60s film star] disguised as an Arab, gave himself away when he was noticed peeing standing up".

"A 16-year-old boy who still got pocket money from his mother gave himself away as a drugs criminal when he offered to buy her a new set of tires".

Not the answer you're looking for? Browse other questions tagged meaning word-meaning or ask your own question.