1 Why can't "who played the mini-golf were the guests" be used to emphasize? 2 When no emphasis, it's grammatical, isn't it? 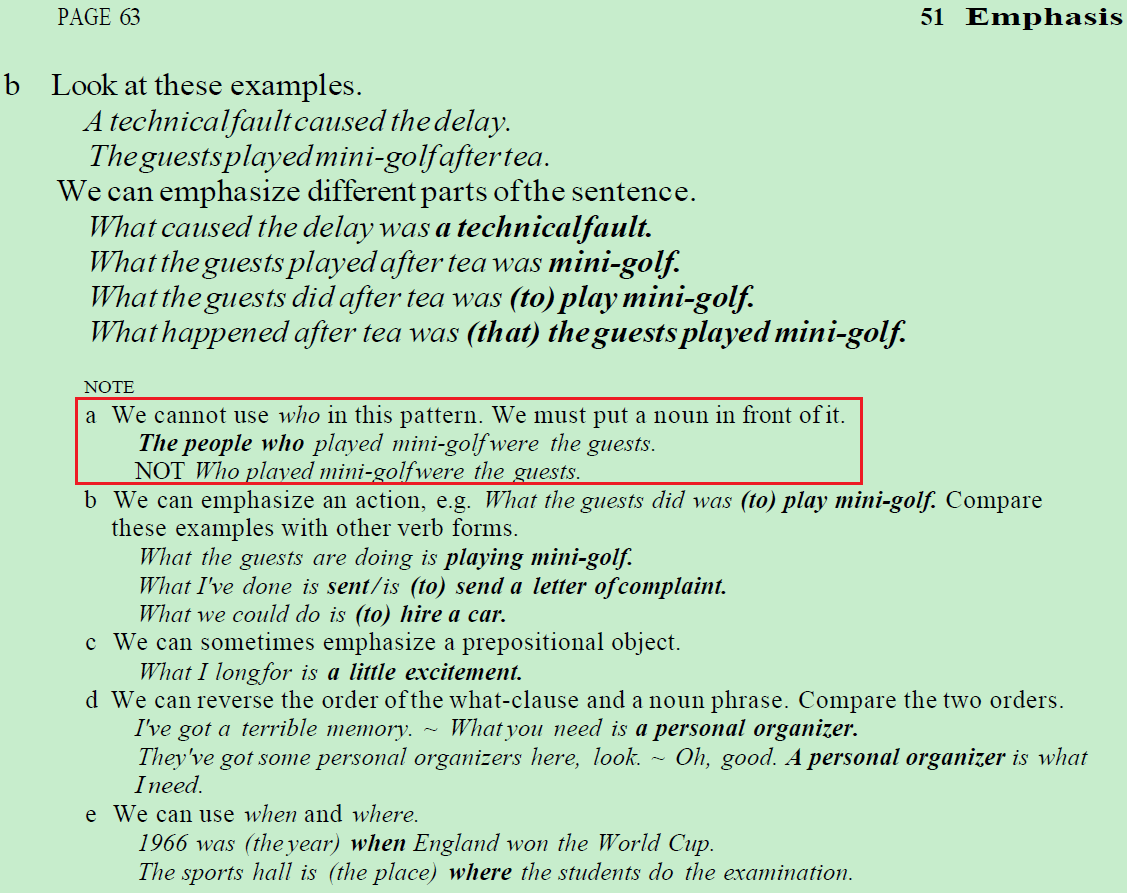 b Look at these examples.

A technical fault caused the delay.

The guests played mini-golf after tea.

We can emphasize different parts of the sentence.

What caused the delay was a technical fault.

What the guests played after tea was mini-golf.

What the guests did after tea was (to) play mini-golf.

What happened after tea was (that) the guests played mini-golf.

a We cannot use who in this pattern. We must put a noun in front of it.

The people who played mini-golf were the guests.

NOT Who played mini-golf were the guests.

2 When no emphasis, it's grammatical, isn't it? We can make such sentences, can't we?

The word what can mean "that which" and thus it can be used as the subject of a verb.

What goes around comes around.

But who in modern English does not mean "Those who" or "He who" except in literary uses, and sayings which have been frozen in time, as it were, like proverbs:

Who pays the piper calls the tune.

Who uses games may often prove a loser.

In modern English, since the early 18th century, we use the word whoever when we want to use who as we use what.

Whoever took my book should give it back.

P.S. With you miniature golf example, you could use Those:

Those playing miniature golf were the guests.

It is the phrases starting "what" that are the exception:

What started the fire was a match.

But that is a special case. You normally need a noun to modify. You can't say

Without emphasis you would say

John started the fire.
The fire started at 2:30 (note the order)
The guests played minigolf.

Not the answer you're looking for? Browse other questions tagged grammar subjects emphasis .

3
With or without "would", what's the difference?
1
what does ''would have seen'' mean,what grammar is it?
1
A teacher said to use "I don't need that" instead of "I won't be needing that" because there is no "continuous in modal verbs"
0
Using past perfect continuous in this situation