Article usage- A tablet, cellphone, […] and a piece of paper IS/ARE on the table 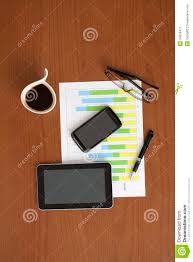 What is the correct usage of article if different objects are stated in a group in a sentence. Particularly:

There IS/ARE a tablet, a cellphone, a ball pen, a reading glass, a cup of coffee and a piece of paper on the table.

There IS/ARE a tablet, cellphone, ball pen, reading glass, cup of coffee and a piece of paper on the table.

Do I have to repeat them again and again or not? Especially if they are all singular.

Idiomatically, it's quite okay in such contexts to use the relaxed / colloquial contracted form There's with a plural referent, instead of There are (which many would find "awkward" to enunciate as contracted There're). Usually (but not always), this can be partially excused by the fact that the plurality of np's1 that follows is often thought of as a "single interrelated collection of things".

But this usage isn't idiomatically acceptable if you explicitly articulate the full singular verb form is, because that would draw unwanted attention to the verb plurality clash.

As regards repetition of the article in such a "list-type" context, this is purely a stylistic choice. Obviously including the article each time emphasises the "rhythm" of the list - so it feels more like a potentially endless series. Since we know what the first word of the next item will be, we "internally anticipate" it in advance, and tend to end up "half-counting" an extra item after the final thing actually specified. (See @KRyan's comment for other reasons to choose verbosity / brevity.)

1 Revisiting this post to improve some clumsy phrasing, I considered replacing np's there with fully-expanded noun phrases. But then realised I wouldn't really be happy with that unless I also changed the verb plurality to ...that follow are often thought of as...

Presumably that's because the plurality of np's is a short enough "preceding referent" for me to lump it all together as a singular verb subject. But it's too much trouble for me to remember that far back with the "extended" version, so I just stick with the immediately-preceding plural phrases.

Which just goes to show there's rules and there's rules - an oddball idiomatic usage usually meaning something like There are many rules, but they're often inconsistent, and not all of them always need to be honoured anyway. And certainly different native speakers will disagree on exactly how far it's "acceptable" for "correct" English to ignore strict logic when it comes to singular and plural verb forms.

FumbleFingers addresses the question of whether to conjugate the verb as singular or plural (answer: either is OK) so I'll take the other part: It's fine to omit repeating articles in casual conversation.

There is a cellphone, tablet, pen, coffee cup, and some other things on the table.

I would include them in writing, unless I was transcribing dialogue.

Here is a famous post from the erstwhile ELL stalwart and CamGEL champion F.E. on this exact topic over on English Language & Usage. You'll find that the normal rules do not apply in this situation—whether or not you use there's or there is... :

You should trust your ear. :)

This topic comes up a lot. Your question involves an existential construction.

In Quirk et al., page 1405, in section "The status of existential there as subject", it has:

18.46 The there of existential sentences differs from there as an introductory adverb in lacking stress, in carrying none of the locative meaning of the place-adjunct there, and in behaving in most ways like the subject of the clause, doubtless reflecting the structural dislocation from the basic clause types:

(i) It often determines concord, governing a singular form of the verb (cf 10.34 ff) even when the following 'notional subject' is plural:

(ii) It can act as subject in yes--no and tag questions:

(iii) It can act as subject in infinitive and -ing clauses:

Huddleston and Pullum et al. go into this in even more depth, in their section "Evidence that subject function is uniquely filled by dummy it and there" on pages 241-3.

I discussed the above because there are numerous, er, grammatical sources out there that get this wrong.

I've seen a lot of bad guidance, er, "rules" getting passed around as to the pseudo-subject/verb agreement. Here's one:

"there is" + < plural noun phrase > is indeed nonstandard

for that evaluation is dubious, obviously. One can easily create contexts and examples to disprove that evaluation. For example, using the plural noun phrase "two hundred dollars",

I'd think it'll be quite easy to create a context where that example sentence is acceptable.

Many instructors teach that the verb should be plural or singular depending on what that verb would be in a corresponding sentence where the RHS is the subject. Using the above example:

is acceptable and grammatical. (That example uses a subject that is a measure phrase, and this issue is discussed in Huddleston and Pullum et al., CGEL, section "(a) Measure phrases", page 504.)

And so, an existential construction corresponding to that could then be:

That sounds fine to me.

When the RHS includes a coordination of noun phrases, things can get confusing. Some usage guides and usage commentators prefer that the BE verb agree with the closest noun phrase for that situation. E.g.

and some still want the plural verb even when the first noun phrase is singular,

Of course, if this is dirtied up with an "or" or "nor" coordination, then existential constructions can really clash with their corresponding versions where the RHS is the subject. E.g.,

Context is king. For instance,

I come from a small family. There is grandpa, mother, my big sister, me.

Hopefully an "editor" won't dare to mark that use of "There is" -- if the editor did, then that's an instant STET and a request for a different editor.

This post is getting long. Let me end it with this following bit of info.

A decent usage dictionary, such as MWDEU or MWCDEU, can provide useful info as to standard usage of the existential construction. In my Merriam-Webster's Concise Dictionary of English Usage, entry "there is, there are", on pages 732-3, this is the concluding paragraph:

Jespersen notes that the invariable singular occurs mostly in the colloquial style--speech and speechlike prose--and is generally avoided in the literary style. That observation accords with our evidence. In the more complex constructions, you are best guided by your own sense of what sounds right in the particular context to avoid awkwardness and maintain the smooth flow of the sentence.

If the items are a series of items in the singular, the verb is singular; there is.

There is a cellphone, tablet and ball point pen on the table. [single items, listed separately, singular verb, no need to repeat the determiner a]

If the items are a plural word, the verb is plural.

For items listed separately, the verb is never plural:

There is a boy, a girl and a dog in the garden. [here, a is needed as the people and the dog are different categories, in my opinion]

There are three living beings in the garden.

contractions would be: there's (singular) or they're (plural).

Please note: one hears There's + plural noun, as in "There's people who live around here who think that drunk driving is a sport".

Use that type of construction at your own risk. It is marked as informal but can also sound quite unschooled. For example, "There's chickens in the yard."

"There is a tablet and a cellphone" can be interpreted as "There is a table and there is a cellphone", in which case the singular verb is appropriate. However, it can also be interpreted as "A tablet and a cellphone exist", in which case a plural verb would be appropriate. If you don't repeat the article, I would lean towards plural verb. Note, however, that in this case you have "reading glass", which should be "reading glasses". This pushes it even further towards plural.