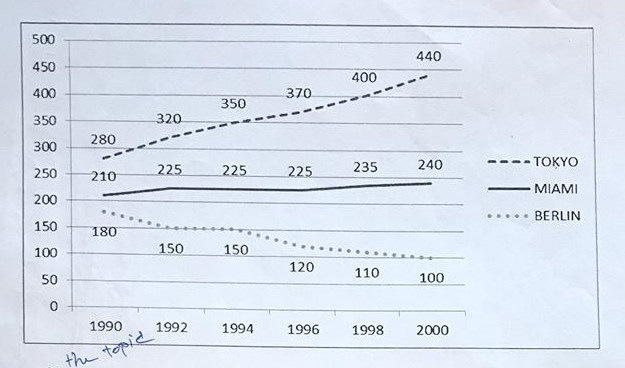 And if yes, that means you CAN NOT say:

And, no, you can not say that.

They may be equivalent, but neither makes any sense as written.

An average is a single number that summarizes a set of numbers.

It would also make sense to say "The graph shows monthly patient numbers at public hospitals from 1990 to 2000." This plural formulation stresses that the graph represents a large set of numbers.

Which formulation to use depends in part on what you want to stress. Sense and intent determine word choice.

EDIT: A comment by the OP is causing me to amend this answer somewhat. It now seems that the numbers are not monthly numbers at all, but rather monthly averages by year. That is the only way to make sense of the comment. It is also consistent with the lack of detail in the graph.

The line graph shows average numbers of patients using public hospitals every month, from 1990 to 2000.

The line graph shows average patient numbers at public hospitals every month, from 1990 to 2000.

The first is ambiguous. It could mean:

1a. numbers of patients using public hospitals per month

1b. numbers of patients who have to attend hospital on a monthly basis (e.g. regular patients attending for monthly chemotherapy)

Your second sentence is unambiguous.

Not the answer you're looking for? Browse other questions tagged grammatical-number ielts or ask your own question.

2
Can the form of a verb be determined by the meaning of the subject instead of its grammatical number?
1
Several number of something or Several numbers of something?
1
Agreement of number in relative clauses
3
Number description for Writing paper, Task 1, IELTS
1
Question about “an unlimited number of times”
1
Grammatical number agreement: “We detected particles with a distinct envelope and a dense internal part”
1
grammatical number: no + plural or singular nouns?
0
number of noun after no
0
Nouns expressing number and weight