How about "When I saw Debbie, she had played golf"? 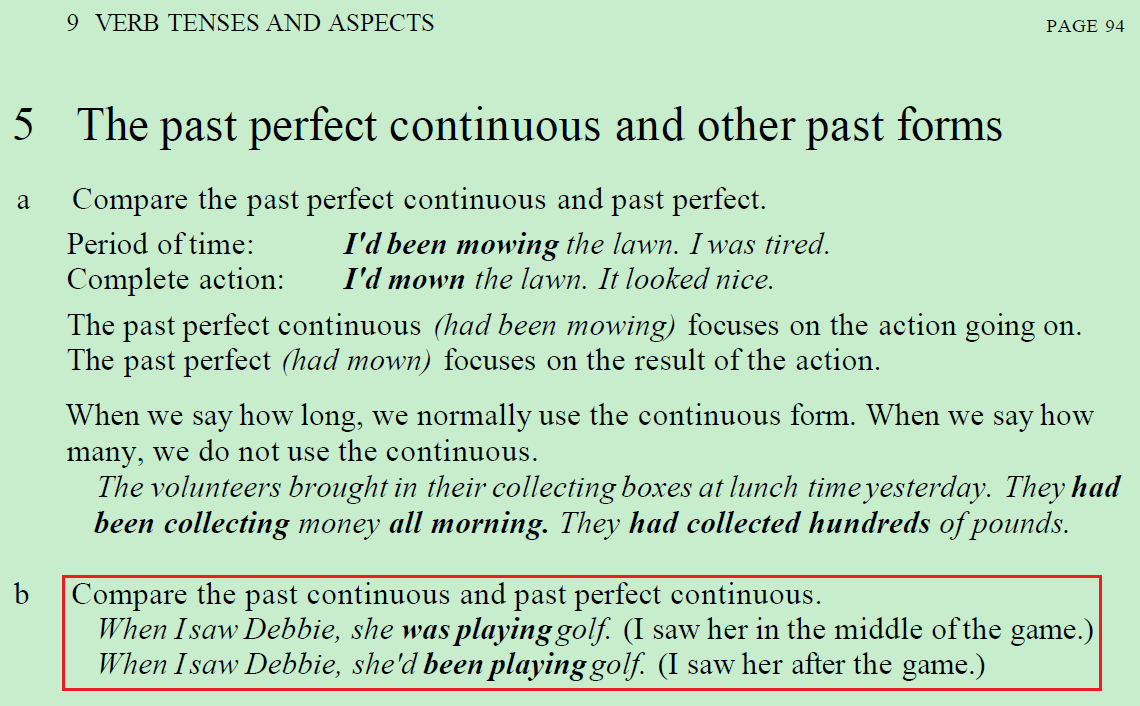 When I saw Debbie, she was playing golf. (I saw her in the middle of the game.)

When I saw Debbie, she'd been playing golf. (I saw her after the game.)

I think "When I saw Debbie, she had played golf" can also express "I saw her after the game". Am I right?

Is there any difference in meaning? Does the perfect continuous imply that "I saw her right after the game"?

relative: Is "Outside the house were two women talking" a grammatical/good sentence? partial inversion vs full inversion

The past perfect would not be absolutely incorrect there, even if the intended meaning is that she had just come from the golf course when you saw her. But because of its aspectual sense of "achieved completion as of a point in time" the perfect alone is not ideally suited to that meaning, though it could easily be put into service with a small addition:

When I saw Debbie, she had just played a round of golf.

Same tense, but with the addition of "just" to indicate the temporal relationship. The phrase "a round of golf" adds the notion that this activity is telic, one having a defined end. "Playing golf" is not telic but atelic.

If you want to say that she had been engaged in an atelic activity (and to imply nothing more) use the past perfect continuous:

When I saw Debbie, she had been taking guitar lessons for about a year.

The simple past perfect would not be absolutely wrong with an atelic activity, though it does convey the aspect that those lessons had culminated in some way, or perhaps had ended for some reason:

When I saw Debbie, she had taken guitar lessons for about a year

That sentence is slightly off, its door slightly ajar, its focus aspectually "blurry". The perfect opens the door to some kind of end or achievement and so it runs counter to the verb's a-telicity. It partners with such a context: had Debbie decided to quit the guitar? had Debbie been murdered? did she switch to the saxophone? did she join a band? Was she deciding whether to continue? Was she marking a milestone? Was there going to be a concert where students who had been taking lessons for a year would show their progress? Whatever.

"When I saw Debbie, she had played golf."

This implies that she has, at some point in her life, played golf. Not that she has recently finished as you seem to expect.

I agree with Omegastick. There is another example where you can use the past perfect. You would like to play golf with Debbie but when you saw her she had already played a game or a round of golf with someone else and she was tired. Like Tromano said this round of golf was completed before you saw her and the focus is on the completion, whereas she had been playing means she had just finished the activity and the focus is on the activity. It's a different situation.

Not the answer you're looking for? Browse other questions tagged perfect-constructions perfect-aspect .

0
Is "Outside the house were two women talking" a grammatical/good sentence? partial inversion vs full inversion

3
When 'past modal+have+past participle' accompanies with past tense in a sentence, can it be before the past or at the past?
2
Is it ok to say "would have had to have played" and "to have even had"?
3
Difference between Simple Past and Past Perfect
2
How has she gone to Prague?
3
Have I had known about the lack of security
4
"I saw him before he had seen me" - paradoxical past perfect with before
2
Past Continuous and past perfect continuous for native English speakers
1
Present perfect for situations before another past event
0
what do you think about these 4 past perfects?