this is from double espresso - you are practical and hard working. you like knowing that one shot just doesnt do it for you anymore? I am nit sure if this is related to double and single shot, that single shot is nit enough ? pls advise

At first glance, the specific meaning of you like knowing that one shot just doesn’t do it for you anymore doesn't seem to be any different than the simple combination of the words. In other words, it's open to interpretation.

The following is from an article titled "The Cup in Question – Coffee Personalities" in Niche Magazine:

However you take your coffee, that favourite beverage is telling of your personality! Well, at least according to the new book You Are Why You Eat: Change Your Food Attitude, Change Your Life by psychologist Ramani Durvasula. The book details a survey that studied 1,000 coffee drinkers, connecting coffee choices to specific personality traits. Survey participants were given common daily occurrences such as waiting in line, planning a dinner party or making weekend plans. For each situation, they were asked how they typically manage each situation, and how they drink their coffee. Here is a tall version of the venti story… with a little fun stirred in for good measure!

espresso
You’re friendly and adaptive. You actually like the taste of coffee, a rare, but admirable trait.

double espresso
You’re practical and hard-working. You like knowing that one shot just doesn’t do it for you anymore.

triple espresso
You’re enthusiactic, but obsessive. You’ve been awake since the late 90’s.

The list goes on, detailing more types of coffee (and personality) than just these three.

The types and descriptions are shown in the following picture: 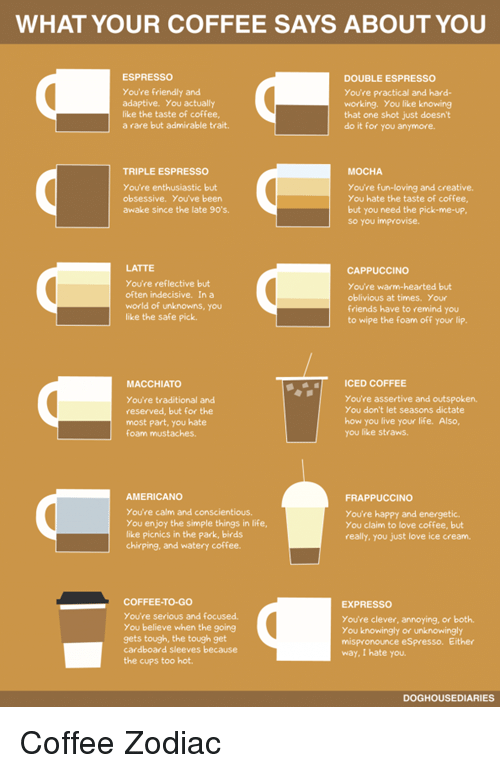 While the categories of personality types may be explained in the book in general, the specific meaning of each phrase may be kept unclear. (Only somebody who's read the book—or Ramani Durvasula herself—could know.)

Looking at the picture (it's also unclear if it was adapted from the book or if the book made use of it) and its caption Coffee Zodiac, a reference is being made to people's twelve astrological signs and the kind of horoscopes that would be given about them on any given day.

Horoscopes are generally vague and nonspecific. If you look at some of the other examples in the picture, you'll see that some are almost deliberately nonsensical and only provided for the sake of humour.

We can only speculate why requiring more than one shot a day would be seen as something positive—something that "you like knowing." (Some people might see it as negative or a sign of dependency.)

In American English†, shot is a term used by aficionados for a single espresso; in volume a single espresso is similar to a "shot" of whiskey. The term for that amount of the alcoholic beverage was adapted to the domain of espresso.

In the phrase doesn't do it for you, do it means "to suffice".

A pat on the back and a few words of praise doesn't do it for me anymore. I want a decent raise.

† and possibly in BrE as well, I don't know.

Not the answer you're looking for? Browse other questions tagged meaning meaning-in-context terminology .