What does 'draft' mean in this context?

Ron had become an instant celebrity. For the first time in his life, people were paying more attention to him than to Harry, and it was clear that Ron was rather enjoying the experience. Though still severely shaken by the night's events, he was happy to tell anyone who asked what had happened, with a wealth of detail.

“… I was asleep, and I heard this ripping noise, and I thought it was in my dream, you know? But then there was this draft…I woke up and one side of the hangings on my bed had been pulled down…I rolled over…and I saw him standing over me…like a skeleton, with loads of filthy hair…holding this great long knife, must've been twelve inches…and he looked at me, and I looked at him, and then I yelled, and he scampered.

I don't know what "there was this draft" refers to. I've looked up the word 'draft', but it appears to have many meanings and I don't know which one should be applied in this context. What does it mean exactly for this context?

The usage of "draft" in this case is along the lines of this definition:

a current of cool air in a room or other confined space. 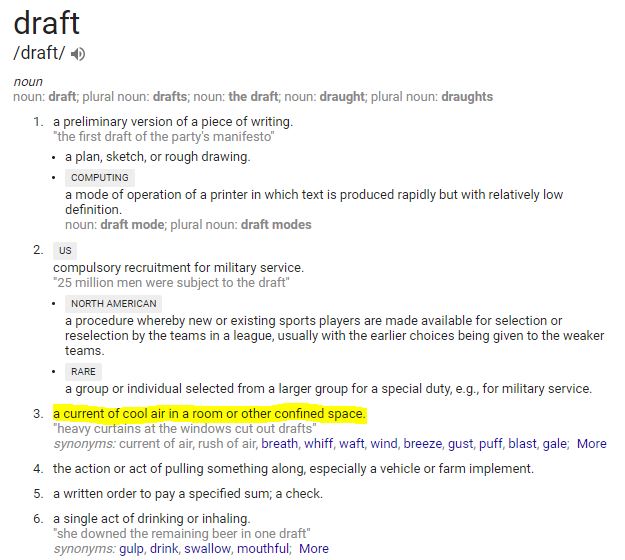 Simply put, in this sentence Ron is saying that while he was sleeping he felt air blow over him, and he woke up to find Sirius Black standing over him.