"Severus, you're making a mistake," said Lupin urgently. "You haven't heard everything -- I can explain -- Sirius is not here to kill Harry --"

"Two more for Azkaban tonight," said Snape, his eyes now gleaming fanatically. "I shall be interested to see how Dumbledore takes this.... He was quite convinced you were harmless, you know, Lupin... a tame werewolf --"

"You fool," said Lupin softly. "Is a schoolboy grudge worth putting an innocent man back inside Azkaban?"

BANG! Thin, snakelike cords burst from the end of Snape's wand and twisted themselves around Lupin's mouth, wrists, and ankles; he overbalanced and fell to the floor, unable to move. With a roar of rage, Black started toward Snape, but Snape pointed his wand straight between Black's eyes.

Black stopped dead. It would have been impossible to say which face showed more hatred.

Harry stood there, paralyzed, not knowing what to do or whom to believe. ...

I don't understand, in this context, who actually said "Give me a reason, ..." (Snape or Black?), give a reason to do what and I swear I will do what?

Well, it's not crystal clear but I think that is Snape the one that said "Give me a reason".

It's the typical action movie scene. Replace the wand by a gun pointed to the head. The actual threat is not explicitly stated, what he is going to do. He's going to "shot" a spell if Black moves. It's something like "Give me a reason to blow your brains out with a deadly spell, I swear I will". 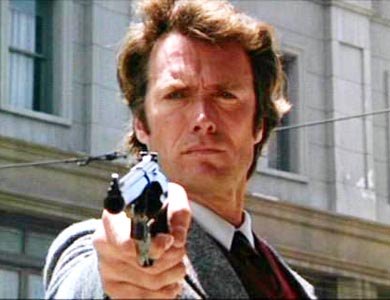 Give me a reason, punk

Not the answer you're looking for? Browse other questions tagged reading or ask your own question.