What is the difference between 'build' and build up'?

Is there any difference between 'built up' and 'built' in the following sentences? 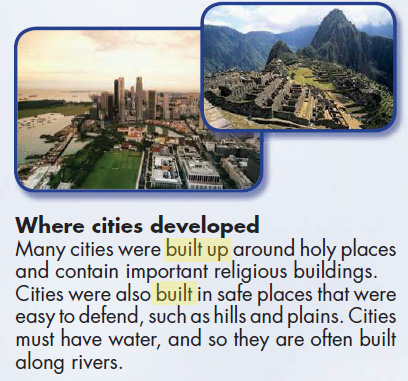 Does the preposition 'up' add special meaning to the verb 'built' in the first sentence?

build on its own simply means "to make something by putting bricks or other materials together".

According to the Cambridge Dictionary, build up means "to cause something to increase or become greater". In this context of cities, this would mean extending something that is already there, or filling in gaps.

In the text that you have provided, the term "build up" is used in the first sentence to indicate that the city was added on to a holy place that already contained religious buildings. In the second sentence, the term "build" is used, because there was nothing there until somebody decided that the location had some strategic advantage: the city was built from scratch, rather than being added to something that was already there.

The word "up" in this context isn't precisely a preposition, but rather a particle. "To build up". What's fascinating is how "build up" is analogous to the separable verb aufbauen in German, which becomes "bauen auf". It's almost as if the construction of separable verbs in German actually explains how this word operates in English.

As far as the difference in meaning between "build" and "build up", obviously they are similar. Checking a dictionary, there is an entry for "build up":

to fill in with houses; develop into an urban area.

At the same time, the word "build" has the general meaning of "construction". So, it seems that you could choose either one, but "build up" adds a bit more more nuance or exactness to the description.

Not the answer you're looking for? Browse other questions tagged meaning prepositions word-difference .