In this drawing lesson at around 13:16, the drawing teacher (artist) draws one line back and then the second line down and explain: 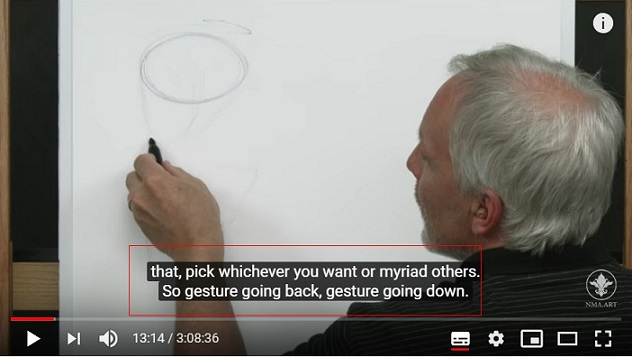 What is 'gesture' for him (direction? or movement? or direction of movement?)and why he say 'going' I mean why not 'is going' or 'goes'?

It sounds like he's just omitting some of his sentence, meant to be a command.

This could really be interpreted in a few ways, but either way, the meanings are similar.

In this case, "going" is used like a preposition. He's using it to show the direction of the gesture from its starting point.

Not the answer you're looking for? Browse other questions tagged grammar meaning word-usage or ask your own question.

4
A name for a finger gesture (not “the bird”, “thumbs up”, or V-gesture)
0
What about the preposition before 'here' and 'there'?
0
What Trump meant by the last sentence?
0
What is the difference between 'come' and 'go' when they use figuratively?
0
Which tense is it? Is it grammatically correct?
0
Am I using “back up” and “back over” correctly?
0
Go some in number
1
meaning of “not as common”
0
Can somebody explain clearly what is different between 'draw' and 'pull'