What does “dominate” mean in this context?

Mercury is 4,880km wide and is dominated by its giant iron core. [BBC]

My tries: (based on checking the Longman dictionary)

Additionally I would be grateful, if you would not deem it as off-topic, to write the definition of wrinkle and shrink in this context.

"Dominated by" means "has as the most noticeable feature".

So, most of the near-5000-kilometer diameter of the planet is its iron core.

Similarly, a very large building is said to "dominate" the skyline, or a vital issue like the economy might "dominate" an election.

"Wrinkled" here just means the surface of the planet has ravines or canyons that (from a great distance) suggest wrinkles on a face or a piece of fabric.

I don't know what "shrinking history" means. Perhaps Mercury is not as old as scientists once believed.

EDIT: Someone apparently claiming to be Paul McCartney points out that "noticeable" could be interpreted as "noticeable on visual inspection". You can barely see Mercury at all, and even if you were close enough to see the surface, you still couldn't see the core. The article means, "If you looked at a cross-sectional diagram of the planet, you would see that Mercury is mostly iron core, with a thin layer of something else on top."

Dominate in this context ([Mercury] is dominated by its giant iron core) means that most of Mercury is its iron core. Its iron core is an obvious, so noticeable part of Mercury. It's widely known that Mercury's mean radius is 2439.7 ± 1.0km, and its core's radius is approximately 1800 km. 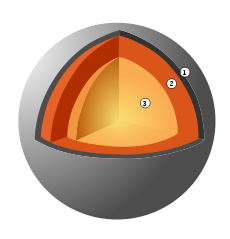 Here is another way we could paraphrase the sentence and the headline.

"Shrinking" means becoming smaller. "Wrinkled" is an adjective and can be used to refer to skin (or surface, in our case) that has a lot of small lines on it. Here is a nice way to explain why Mercury's shrinking results in its being wrinkled, as I found in Meet Mercury, the incredible shrinking, wrinkling planet - latimes.com:

... signs of deformation should show up on the planet’s surface -- like a plump, smooth-skinned grape that dries up, shrinks and turns into a wrinkly raisin.