He arrived “breathless” at the top of the stairs

I came across this sentence when I looked up the word breathless in OALD:

He arrived breathless at the top of the stairs. 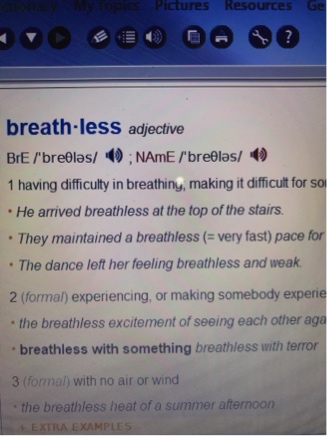 The adverb 'breathlessly' would modify the action of the verb 'arrived' and bring to the idea of 'arrival in a breathless manner' instead of the desired sense: he arrived there being breathless (he was breathless by the moment of arrival).

Not the answer you're looking for? Browse other questions tagged adjectives adverbs adverb-placement or ask your own question.

3
What kinda construction 'everything else fails' is?
6
How can I identify a word that ends with “-ing” as being a noun, a verb, or an adjective?
2
While some types of coral reefs are living/alive others are dead
1
The usage of adjectives and adverbs
5
Do the words “gay” and “queer” always have a deragatory connotation? When do they not?
22
Why has “strangely” been used instead of “strange” in the sentence “Harry felt strangely”?
0
Does the verb “reduce” have an adjective form meaning “can be reduced”?
2
Can the adverb “exclusively” in the sentence be replaced with an adjective without changing the meaning of the sentence?
0
Adverbs before adjectives
0
Absence of inversion when adverbs of place and direction go in front position