I'm trying to write a clear, beautiful, formal sentence about the order of data sets in this chart: 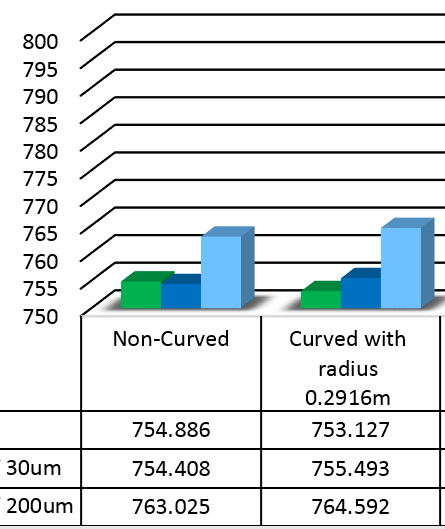 As you can see, the order of the values for "non-curved" data points (from higher to lower)is light-blue, green and blue.

And the order of the values for data points in the set called "curved with radius 0.2916" is light-blue, blue and green.

I want to say that they are not compatible. Is this a good word for what I'm trying to say?.

What would be the best (clear, beautiful and formal) way to say it? Do you have a suggestion?

I wouldn't use the word 'compatible', which means that two things or people can function together harmoniously.

It would be a good idea to identify which quality you're ordering when comparing the data sets. It's the order of the value corresponding to the uu values from lowest to highest that is different. So:

The order with respect to the value of uu is different between the two sets.

But if you just want to use one formal word to say they're different, you could say

The order of the two sets is not identical.

The order of the two sets is dissimilar.

Not the answer you're looking for? Browse other questions tagged meaning sentence-construction .

3
to have something something else -- grammatical pattern
4
How to say I switch from one math class to another?
2
Can the word "one" be used to refer back to another word in the sentence?
1
"When applying on" or "applying to"
0
What does "adult choice" mean?
0
What is the correct way to say: Collected data from acts/laws and from <ministry counterparts> via phone and email?
0
What does an "abstract model" mean?
2
How to put equal emphasis on the application used in a training program in addition to the content/material taught?
0
sentence falls apart when I add a second example