Is "bridles lashing about the horses" correct?

Not sure what preposition + verb combinations you can use with bridles and horses. Is there a way of figuring these out as a non-native speaker? I feel you can only know after memorizing a couple of examples.

Anyway, the real question is the following:

Is the following grammatically correct?

The bridles were lashing about the horses as the horsemen were trying to escape the King's cavalry.

I am not sure why, but there's something about this sentence that doesn't seem right.

Bridles are the headgear placed on horses' heads in order to keep them controlled: 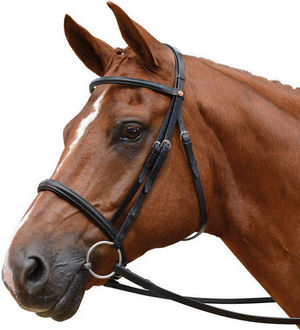 It wouldn't make any sense to say that this headgear was lashing about the horses. If it were loose in that way, it would be a serious problem.

Instead, the word you're looking for is most likely reins:

: a strap fastened to a bit by which a rider or driver controls an animal —usually used in plural

In the picture, the reins are the straps that have been fastened to the horse's bridle, through a ring that's also connected to the bit in its mouth.

I don’t know where you found your original sentence, but the way you mention prepositions and verbs makes me wonder if you’re analyzing it correctly.

The bridles were lashing [about the horses]...

where about is a preposition; rather, about is an adverb, describing how the bridles were lashing.

Consider this definition from Wordnik:

about (adv.) All around; on every side: Let's look about for help.

So, your sentence could be rephrased as:

The bridles were lashing all around the horses as the horsemen were trying to escape the King's cavalry.

One way we can tell that about is an adverb here is that we can omit the phrase “the horses” and the sentence still makes sense:

The bridles were lashing about as the horsemen were trying to escape the King's cavalry.

I’m not going to address the difference between bridles and reins as that was already discussed in another answer.

Not the answer you're looking for? Browse other questions tagged grammaticality .

0
'What about the reverse' is correct?
7
Why are both “when” and “once” used in “... when it was once broken”?
0
Is the use of “flashing about” correct in this sentence?
0
Is "to worry about their children being led astray" correct?
1
About telling the time
0
What's the correct variant
1
Is "Remember about "doing something" correct?