I was writing the following sentence:

"you should break this long paragraph into smaller ones."

For a moment, I wondered whether I should add something between paragraph and into.

I searched on Google and I found three variations:

break this long paragraph up into

break that long paragraph down into

And my original version.

Maybe all of them are the correct answer? But when, how do they differ?

All alternatives are perfectly natural, and it would be overscrupulous to suppose any difference in meaning (or even fine nuance of meaning) attaches to the choice. But the general principle is always simpler is better / less is more, so I suggest you stick with the majority of native speakers... 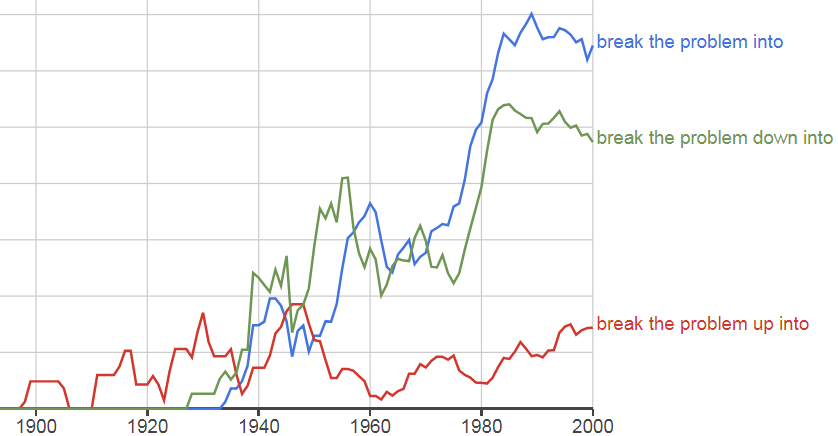 It might just be worth pointing out that you can break [some complex entity] up (or ...down) without actually specifying the "lower level parts" that would thereby result. As the results from this NGram for break the problem [nothing / up / down] and show, if no such "resulting smaller parts" clause is specified, the most common "phrasal verb" form is break [something complex] down.

For contexts where the "smaller parts" are unspecified, you must include one of the prepositions. It's natural to speak of cracking a problem (solving it), but you wouldn't normally crack a paragraph unless it was some kind of cryptic text that you'd successfully decoded.

I would quibble with the statement by FumbleFingers which says that up is vacant of meaning there.

You should break this paragraph.

You should break this paragraph up.

There, the difference is clear. To "break something up" means to cause it to become separated, whereas "to break something" means to fracture it. broken up is the end-state of something which has been broken: not only is there a fracture but the pieces are apart.

When you add into separate pieces, then you have two things in the statement which convey the idea of "apart", the particle up and the prepositional phrase, so it may seems as if up has no force, when into separate pieces is pleonastic. That's like saying "Mush this into a mush."

To break something down is to decompose it.

Not the answer you're looking for? Browse other questions tagged grammar prepositions sentence-construction or ask your own question.

2
How could one 'sit on the hearth'?
1
Problems Break Out Into War
1
'Break in' vs. 'Break into'
0
present simple or present perfect or simple past
3
"They seated themselves (?) either side of Harry"
0
Examining some elliptical structures - Part IV
0
How to correctly punctuate a statement that has a list of questions after a colon?
2
Please break down a complicated sentence