Nominal to-infinitive clause as complement of an adjective 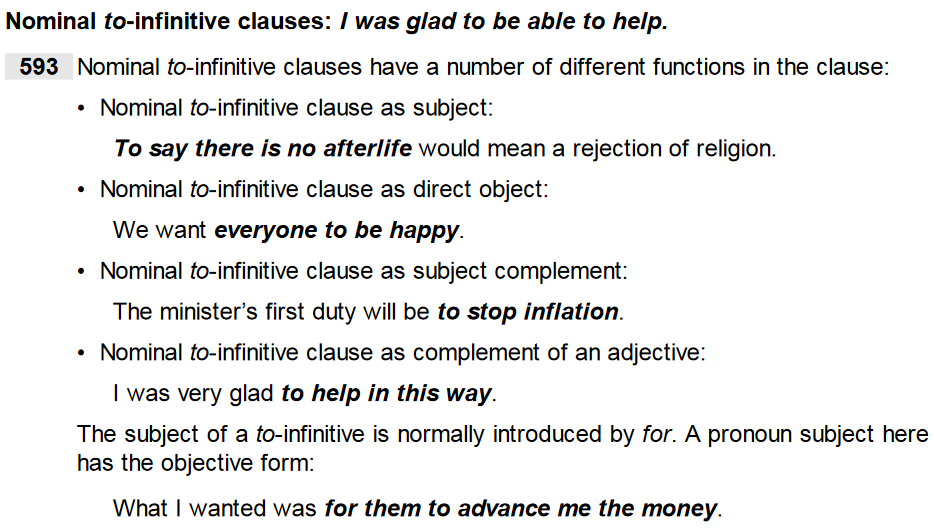 Source: "A Cmmunicative Grammar of English" by Geoffrey Leech and Jan Svartvik (p.328-329)

As you can see, the book says:

To say there is no afterlife would mean a rejection of religion.

We want everyone to be happy.

The minister's first duty will be to stop inflation.

ŌŚÅ Nominal to-infinitive clause as complement of an adjective:

I was very glad to help in this way.

The subject of a to-fininitive is normally introduced by for. A pronoun subject here has the objective form:

What I wanted waas for them to advance me the money.

Is it persuasive for an adjective to take a nominal complement directly? I thought the infinitive clause seems to be an adverbial, not a nominal because It seems to postmodify glad. I'm not sure of it, though. Is it like "worth" in the clause of "the view was worth it"?

Numerous adjectives like ŌĆ£gladŌĆØ, ŌĆ£anxiousŌĆØ, ŌĆ£sureŌĆØ, ŌĆ£amazedŌĆØ etc. license infinitivals, and hence such clauses are complements. By contrast, adjuncts (your adverbials) do not have to be licensed by the head.

I don't know why the authors talk of 'nominal to-infinitive clauses. Infinitivals are not nominals; they are clauses, not noun-like expressions.

We want everyone [to be happy].

"Everyone to be happy" is not direct object of "want". ŌĆ£WantŌĆØ is a catenative verb and ŌĆ£to be happyŌĆØ is its catenative complement. The intervening NP ŌĆ£everyoneŌĆØ is the syntactic object of ŌĆ£wantŌĆØ, but only the understood subject of ŌĆ£to be happyŌĆØ. ŌĆ£EveryoneŌĆØ is called a ŌĆśraisedŌĆÖ object because the verb that it relates to syntactically is higher in the constituent structure than the one it relates to semantically.

"Worth" is often called a transitive adjective because in addition to clauses, it licenses NP complements: "It's not worth the money".

Not the answer you're looking for? Browse other questions tagged infinitives complements adjective-phrases .