I learned that in relative clauses, the relative pronoun acts as a subject or an object or a complement.

Red is the color which we painted the wall.

Is this sentence grammatical?
Paint is a verb that should be followed by a object and a complement, so I think red act as a complement in this relative clause, therefore the sentence should make sense. Is that right?

The teacher doesn't like the student whom we elected class president.

Elected is a verb that should be followed by two objects, so in this clause, even though we have one object class president already, one object is still missing , and whom represents the missing object, is that right?

This is a lesson which the students are eager to learn.

I am slightly confused with this one, inside the relative clause
Subject : the students , verb : are , complement(adj) : eager
to learn acts as an adverb to modfiy the complement(adj) eager,
so the clause itself seems complete already, so what does the relative pronoun which represents here ?

(Yes, adjectives have complements too!)

Here's a tree diagram which illustrates the complexity of the structure: 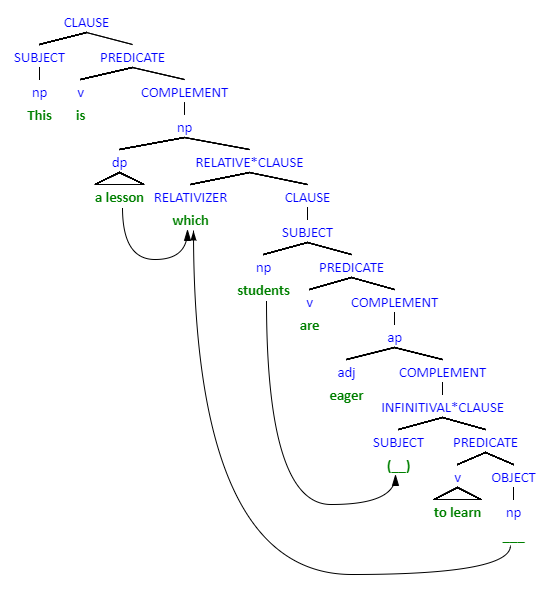 Which refers backward to a lesson and forward to the missing object of learn. Students is the implicit subject of the infinitival clause which is the complement of the adjective eager.

Not the answer you're looking for? Browse other questions tagged relative-clauses relative-pronouns .