Some streets in New Zealand get very narrow because of the things shown in this picture. What are they called? 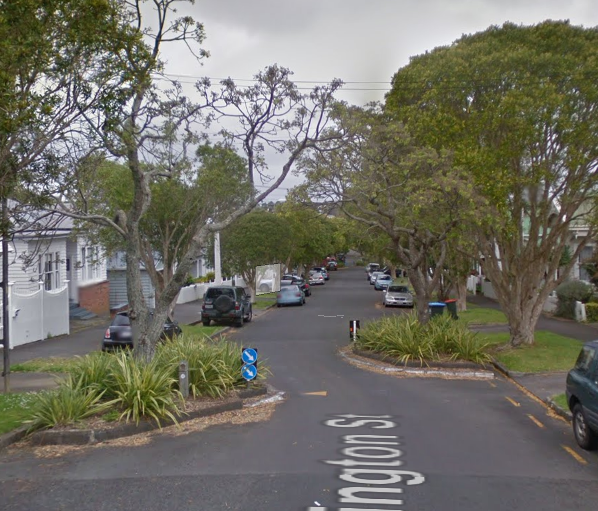 I would venture to say there is no commonplace word. Motorists just see them as inconveniences, as indeed they are specifically designed to be.

For a technical term, I would venture the photo shows a chicane, i.e. a sharp bend or narrowing in the road. It is created by offset curb extensions, for which Wikipedia suggests the alternative terms neckdown, kerb extension, bulb-out, bump-out, kerb build-out, nib, elephant ear, curb bulge, curb bulb, or blister, but without any indication of what terms might be used for what specific constructions in which specific parts of the world.

More broadly, this and similar measures designed to slow traffic by introducing physical and psychological barriers to drivers are known as traffic calming. I always found this term somewhat Orwellian, but it is apparently a calque of the German Verkehrsberuhigung (transportation calming), even though the concept was first investigated in the Netherlands.

In Britain we call those things 'kerb extensions'. I think they do in Australasia too. The path they form for drivers is called a chicane. Kerb is spelled 'curb' in some countries. They are part of what are known as 'traffic calming measures'. You will see pictures and other names (e.g. curb bulb out, curb bump out) if you type 'kerb extension' into Google Images.

Kerb Extensions, according to the New Zealand Transport Agency (NZTA). I am from NZ, but I don't encounter them too often so I'm not sure if they have a slang name.

"Kerb extension A localised widening of the footpath at an intersection or mid-block, which extends the footpath into and across parking lanes to the edge of the traffic lane."

I was quite surprised as I initially had a look through the Road Code - there isn't a single mention of them there.

In Australia they're called "Traffic Calming" features. They don't really calm the drivers though.

Traffic calming uses physical design and other measures to improve safety for motorists, pedestrians and cyclists. It aims to encourage safer, more responsible driving and potentially reduce traffic flow. Urban planners and traffic engineers have many strategies for traffic calming, including narrowed roads and speed humps. Such measures are common in Australia and Europe (especially Northern Europe), but less so in North America.

5
How is this instrument that makes sound from air movement called in English?
23
What is the English name for the palm's spots of the “working hands”?
2
What do you call this place where various goods are sold?
3
What is this large mammal with antlers called: a moose or an elk?
3
What are the forehead sides which lack hair called in English?
27
What is the filling of the stapler called in English? (picture attached)
6
What are “the high ends of castles” called?
21
What is this “opened” cube called?
5
Narrow streets behind houses
0
What's the name of those threads at the edge of cloths?