Is “If he had come tomorrow, I would have gone.” grammatically correct

Is this sentence grammatically correct?

If he had come tomorrow, I would have gone.

I am trying to convey that

He will not come and I can't go. Does it convey the same meaning?

Can "If +had perfect+ would have" be used to express something in future?

If he had come yesterday, I would have gone.

That possibility refers only to the past. So, no, had come cannot refer to the future. However, had come tomorrow" is completely grammatical. Please read on. You can put in any time word/period: tomorrow, yesterday, in two lifetimes, it does not change how the sentence works.

For a possibility that has yet not materialized (future) when I speak to someone in the present time I say:

If he were to come tomorrow, I would go.

That same idea: were to [verb] is expressed like this:

If he came tomorrow, I would go. [It is not likely that he will come]

And if the possibility is not as remote as in the previous two sentences,I would say:

If he comes tomorrow, I will go.
A less strong improbability than the two previous sentences. The possibility is less iffy than with "were to [verb] or the verb in the simple past.

EDIT to my original answer: Please note what Rodney Huddleston says about this issue in his book The Verb in Contemporary English: Theory and Description doubly remote conditional

He gives the following examples: [page 110]

These are the exact same examples in terms of verb tenses that I gave above (spontaneously). I just didn't name them formally. Traditional grammar calls these first, second and third conditional. A conditional by definition is an if- proposition or assumption. Therefore, it is not about the future.

Therefore, the sentence "If he had come tomorrow [or yesterday or next week or whenever], I would have gone" are all grammatical but the use of an adverb of time does not change the fact, none of them are future.

So, I repeat what I said at the beginning "had come" cannot refer to "the future". It only refers to an unmaterialized possibility uttered in a present time.

Indeed, imagine this situation: You (John) are in an office working with an assistant. Some visitor shows up without an appointment. You realize you have no time to meet with this unexpected visitor. You see the visitor through a glass partition window and you say to your assistant: "If he had come tomorrow, I would have met with him."

The implication here is? The guy showed up at your office. Please note the preterit: showed up. Only then does John (the person in the office with an assistant) say: If he had come tomorrow, I would have gone. [logic: But, the visitor didn't come the next day, he came on the day John uttered his sentence.]

What is the implicature (as grammarian says, which is also an implication)? It is that the entire idea of "had gone" revolves around a preterit and not the future. If you read the rest of the paragraph by Huddleston in the link, that will become very clear.

So,to answer the question: Does "If he had come tomorrow, I would have gone." convey: "He will not come and I cannot go." No, it does not convey that. It conveys in the present time of speaking a possibility that is unrealized.

This sentence by Mr. Huddleston: If they had gone tomorrow, they would have met her son. [doubly remote] is the same exact structure as: If he had come tomorrow, I would have gone. The word tomorrow could be: tomorrow, yesterday, next week, in another lifetimes and nothing would change that fact.

Yes, this is a perfectly correct sentence, where tomorrow has the same meaning as it would have in any other conditional sentence. This type of conditional is sometimes called a doubly remote conditional.

We use conditionals like this when it has already been decided that the situation in the if-clause is not going to happen, or when we have ruled it out as a possibility. This is exactly the situation that the Original Poster asks about.

Here is the relevant excerpt from The Cambridge Grammar of the English Language, Huddleston, Pullum et al. (2002, p. 754): 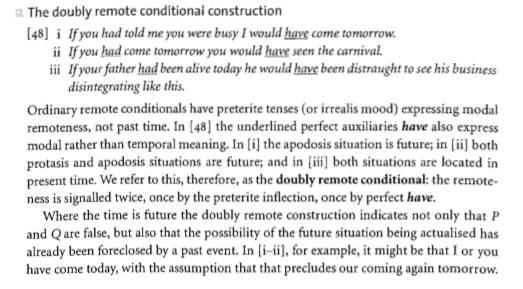 Generally speaking, I would use “I would have gone” with something in the past:

If he had come yesterday, I would have gone.

For something that will happen in the future, I would typically use “I would go” or “I will go”, like this:

If he will come tomorrow, I will go.

As for all of the debate that accompanied some of your answers, sometimes that's inevitable when we ask questions like:

Sometimes a question like "Can we use X to mean Y?" can be interpreted in a couple different ways, such as:

Consequently, you might see differing opinions, but that can happen when people are trying to answer your question from slightly different perspectives, or are making different assumptions about the situation and context.

For further consideration, see the blog post 7 Sentences That Sound Crazy But Are Still Grammatical. It provides some good examples of how even grammatical sentences may not be entirely easy to follow, and might even initially convey something in a confusing way.

Not the answer you're looking for? Browse other questions tagged conditional-constructions perfect-constructions or ask your own question.

0
would not have had?
1
would have come / had come
1
“would have” vs. “had” vs. “should” vs. “has” etc
1
Would I have (had) vs If I would have (had) and Had I vs If I had
2
Perfect non-deictic: “For a long moment he thought he had gone too far” vs “…he have gone too far”
1
If I would have had to be leaving the city tomorrow, would you come see me today for the last time?
1
Distinguishing future from present in mixed conditionals when there's no
0
Do I have to use the perfect infitnitive