I have seen this phrase in pictures:

"Don't settle for no fuck shit"

What does that mean? 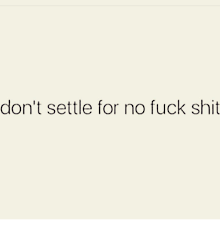 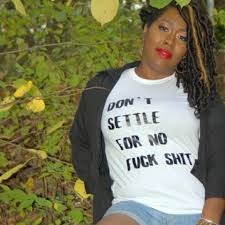 As in many other languages, in English "shit" is an all-purpose scatological pejorative. It can mean various things depending on the context. In this case, it means "stuff that bothers or angers you, or that you just don't like." A related expression is:

I don't have to take that kind of shit from you. (= What you are doing annoys me, and I'm not going to tolerate it)

"Fucking", aside from its more literal meanings, is an all-purpose intensifier when added to some other expression:

Put together "fucking shit" is stuff that really bothers, angers, or disgusts you.

You might find this confusing because the expression uses a double negative. Double negatives are generally considered to be grammatically incorrect, but are nevertheless common in various dialects. Often you can make sense of double negative sentences by changing the second "no" to "any":

Don't put up with / settle for anything that really bothers or annoys you, or that you really dislike.

Of course, without the profanity, it doesn't have the same emotional impact.

Since it's entirely individual judgement what exactly counts as "shit" (in this context), you'd have to ask the person wearing the shirt what it means to her. However, you can take it as general advice, to live your life without ever settling for fucking shit, whatever that means to you.

Side note: Wearing clothing with blatant profanity on it is usually considered uncouth, even if most people might agree with the sentiment.

(Edit) The shirt actually says "fuck shit" instead of "fucking shit", but this doesn't change the meaning in any significant way. It's possible that there just wasn't enough room on the shirt for "fucking" -- given the way the letters are spaced, it looks like she might have done it herself.

Not the answer you're looking for? Browse other questions tagged sentence-meaning or ask your own question.

1
What does “a final step for a period to be agreed upon” mean?
1
What does “don't turn this back on me” mean?
2
I don't think so either
1
meaning of “I don't know” and “suffer for”
1
Meaning of the essay topic: “CSR is no longer an initiative”
0
Meaning of blossom in the given sentence/meaning of the sentece
1
I don't get the meaning of this sentence
0
Have somebody done/doing for regular events
1
Meaning of “Turn aside from”
1
Meaning of “somebody had someone else by X pounds”