Is this food a bread or a loaf? 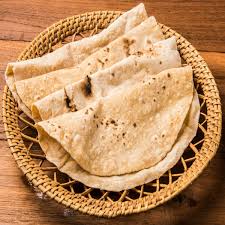 What do we call the food seen in the picture? Is it bread, loaf, or dough?

"Dough" is what we call the raw, prepared bread mixture before it is cooked.

A "loaf" is what we call a whole, cooked leavened bread, made with yeast so that it rises. This is the kind normally prepared in a baking tin and most common in western cultures. A loaf is normally cut into slices for serving. Wikipedia defines a "loaf" as "a shape, usually a rounded or oblong mass of food, typically and originally of bread".

The type of bread you picture is a flatbread. These are unleavened bread; that is they have no yeast in them so they do not rise. There are many different names for these in different cultures, for example, Indian roti or chapatti, or Mexican tortillas. Others have a tiny little bit of leaven added such as Indian naan or Greek pita.

It is called chapati (plural chapatis). It originated in the Indian subcontinent and is a common staple food there. It is also known as roti, safati, shabaati, phulka, or roshi.

It is an unleavened bread, i.e., it is not made up of yeast in its purest form. However, variants like naan, bhatoora, and kulcha are leavened.

Question: What do we call the food seen in the picture? Is it bread, loaf, or dough?

Answer: none of those.

Those are flatbreads, a generic term. There are many kinds of flatbreads around the world.

This is a loaf of bread. 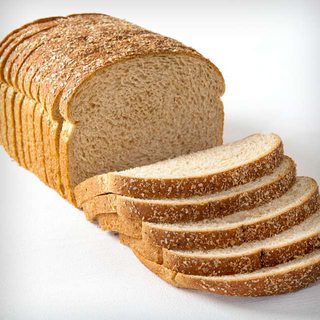 [please note: they are many answers with correct information, but I tried to answer it as simply as possible. The picture does the trick. It shows a loaf of bread that has been sliced. Also, note that we say one loaf of bread, two loaves of bread.]

Specifically, that's chapati (as a transliteration there are various spellings, that's the usual one I've seen and what Google thinks is 'right', presumably based on usage in its index). As we imported the concept, we imported the word. Actually, a lot of now-native English words that aren't for food come from South Asian origins - bungalow, jodhpurs, bangle, bandanna, veranda, avatar, among others - thanks to the colonial (imperialist) history of the British Empire. Some for food, like chutney, come from South Asian origins but are used more broadly than the original meaning.

This is a sort of bread, which means pretty much anything made from a savoury dough, usually but not always from grain flour, that has a relatively soft or flexible consistency. There are also things known as bread that aren't soft at all, but that's more unusual and often derivative, such a crispbreads, which are a sort of cracker. A bread usually has the sort of structure that's created by developing the gluten in the grain, as achieved by working the dough.

A discrete unit of bread that isn't eaten in one go, but is separate from any other pieces that it is cooked with, is a loaf. This might be tin loaves, as found most often nowadays in the Anglosphere, which have a more-or-less rectangular cross-section and are cut into slice to eat, or more traditional free-form loaves popular in mainland Europe, and as historically traditional breads in Britain and Ireland, like cobs and boules, or other sorts of definitely shaped loaves like bloomers and sticks (such as baguettes and ficelles, mostly associate with France). Loaves are generally made from leavened bread - bread that has had gas pockets introduced by yeast or by another raising agent, such as bicarbonate of soda combined with an acid, such as buttermilk or cream of tartar. This gives is the 'bready' consistency expected in most of western Europe.

Bread that isn't a loaf might be a roll (or bap, barm, bun, muffin1, barm cake, or cob - yes, there's a sort of loaf called a cob and it's a regional term for a smaller piece of bread), a generic term for a single-serving of leavened bread. Here in Britain, which term is used as the generic depends on where you are, and sometimes your class-cultural background. Then there's specific types of roll - like sub rolls, baps (yes, some places that's a specific sort of roll), petit pains (itself a French term, but I don't know if they use that phrase specifically the way we do in English), or rolls that are based on a specific type of loaf, like a ciabatta roll. In some parts of the country, the generic term only refers to small bread items with a soft crust, and in others it doesn't matters whether it's soft or crusty.

Bread that isn't leavened (that is, it is unleavened), and some bread that is leavened but that doesn't end up the the same sort of texture (usually because it's so thin), is usually flatbread. This also sometimes includes the Italian focaccia, despite it having a bready texture, because of how it's served and eaten. Most, if not all, of the South Asian breads known in Britain are flatbreads - chapati, puri, naan, paratha, roti (and whether roti and chapati are the same thing appears to be a matter of detbate). We also commonly see tortillas, a Spanish-derived soft flatbread most associated with Latin America, pitta (which we think of as Greek, but is common all around the eastern Mediterranean), lavash (I've encountered that in Turkish restaurants, but it's common across southwest Asia), and a few others are known but not common. There are multiple Italian flatbreads, some soft and not bready, and some that are a leavened dough spread out thin so, while the inside has a bready texture, there's very little 'inside' to speak of.

So, that picture shows chapatis, a kind of flatbread, which is a category of bread. They are unleavened, and like a lot of soft, flexible, unleavened flatbreads they are either wrapped around food to make a 'wrap', or torn into pieces and used to pick up other food. I have no idea if both of those are authentic uses in South Asia, though. They are not loaves, nor are they rolls (or baps, buns, etc).

Finally, dough is made from flour and fat and/or watery liquid(s), and possibly other ingredients, and is what bread (and pastry, and some sorts of cake) are made from. Batter is the same sort of thing, but thinner; some consider batter to be dough think enough to pour. Neither term is used once it has been cooked, except in the some sorts of batter when you make "batter coated" food, like the fish in British fish and chips. There, the cooked batter is a distinct component from the rest of the food, so you might talk about it. Cake batter or pancake batter is never called batter after it is cooked, and dough isn't called dough once it's cooked - though it might be a bread or cake product that incorporates the word dough into the name, like dough balls or doughnuts.

1: not to be confused with the two other types of baked good referred to as muffins. Confusing, eh?

I would call it either flatbread or a wrap. Loaves [the plural of "loaf"] are big pieces of bread which can be sliced. Dough is uncooked bread, although dough can be for pastries or cookies too.

This is called "Chapatti (or Chapati)" in both east and west. So do not worry to use it directly in your sentence.

Although a Chapati is also called "Roti" in some regions of India, but Chapati is universally accepted term for "a thin pancake of unleavened wholemeal bread cooked on a griddle", Which is exactly what your image depicts.

I see a lot of people asking what it can be called in English (American and British) and it should be called roti or chappati in English as well. Inventions originating and heavily used in one country retains their name, for example: pasta, risotto, gyro, hummus, falafel, etc.

Not the answer you're looking for? Browse other questions tagged word-request image-identification food .

9
What do I call this food?
4
The action of getting bite-sized pieces of bread
13
What to call light food served at cocktail parties, that can be eaten on the thumb?
2
What do you call this place where various goods are sold?
2
The act of making rolls of dough
2
Definition for "seeded bread"
1
Bread like a brick name
2
What's the proper word for this type of 'porridge'?
0
Is it natural or idiomatic to say "I can't eat dinner with just only rice/ bread. I want to eat with savory food"?
0
Why can't we say "take a bite off the loaf"?