How is this a bad pun?

Can someone explain to me how this second sentence is a bad pun?

“Yeah, but just the medium ones this time. I’m not too hot on the honey barbecue kind.”

Chicken wings are traditionally sold with sauces, which cover a variety of heat on a spiciness scale. See, for example, this chart, from a popular wing franchise in the U.S.: 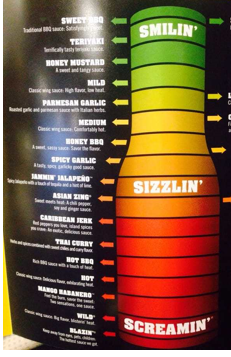 A sauce like Honey Barbecue is usually one of the more mild options available.

In your joke, the person is asking for spicier sauce with their second helping.

So, the bad pun here plays off the word hot:

I'm not too hot on the [insert name of mild sauce here].

It's not even clear to me if it was an intentional pun in the first place. If it was, I agree that it's a poor pun. But I'm not sure I'd call it a bad pun—in the sense of it being a well-constructed pun that makes somebody groan out loud because of clever word play.

"Just the medium [wings] this time."

The use of the word medium refers to the spice level. They are saying they don't want mild wings or hot wings.

"I'm not too hot on the honey barbecue kind."

Here, hot may be playing a dual role.

At the very least, it's being used in a sense synonymous with keen or interested. So, they are saying they don't want honey barbecue wings this time. Instead, they want medium.

But hot, if it's a deliberate pun, may also be a reference to the level of spice. In other words, "I"m not feeling like hot wings either, I'd rather just have medium. Certainly, the person who responds with "bad pun penalty" is interpreting it as an attempt at a pun—and calling it out as a bad one.

However, I would call it more of a poor pun than a bad pun. To me, the construction doesn't make it obvious it's a pun in the first place. Simply reading it, without there being a suggestion of a pun, I would mainly interpret hot only in the sense of keen. Only if the person saying it emphasized the word as they were saying it, and perhaps used air quotes or wiggled their eyebrows as they were saying it, would I understand they'd meant to say it in a joking manner.

I just Googled bad pun. This is one of the first results I got:

I lost my job at the bank on my very first day. – A woman asked me to check her balance, so I pushed her over.

Here, there is no question that a pun is being made. It's the only way that the entire statement [no pun intended on my part there: bank, balance, statement . . .] makes sense.

I would call that one a bad pun because it obviously is a pun, but it's also one that makes you groan at the word play. (Still, whether you agree with the person who said "bad pun penalty" in the question or not, that is what they were referring to.)

Not the answer you're looking for? Browse other questions tagged meaning-in-context pun or ask your own question.

0
The meaning of the phrases or sentences in bold?
4
"can" and "can't". How and why?
3
Is pun objectionable?
0
What does the word 'catch' mean in this context?
2
"Get out of that one" meaning in this context?
0
Meaning of the word "how" in context
1
"You see, no one could believe that he would ever have done it." What does it mean?
0
How do English speaker know if a sentence is ideal?