Is there a verb opposite to "slow down?"

I'm searching for a word that means "accelerate" but should be made of the word "fast" and would be opposite of "slow down." Something like "fast up."

Insulin slows down the breakdown of glycogen.

Insulin fasts up the synthesis of glycogen.

If the word "fast" cannot be used, what would be the most appropriate other word, except accelerate, in the above example? "Speed up?"

The term the synthesis of glycogen isn't common enough to draw meaningful conclusions by searching NGrams (chart-based interface into the vast Google Books corpus), but here's what I found using protein synthesis... 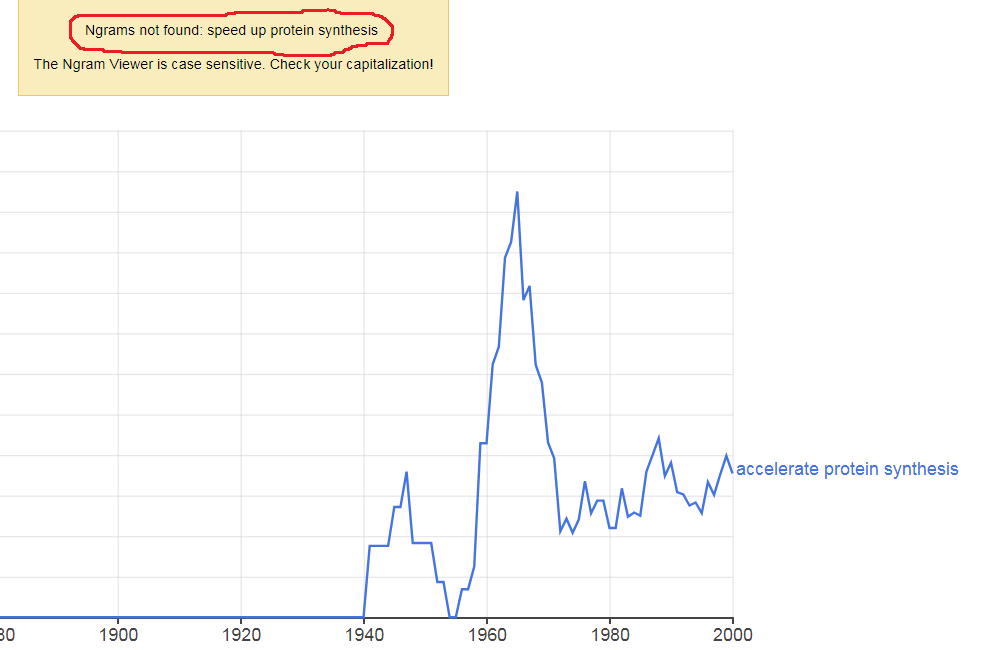 Maybe it's just that to accelerate sounds more "professional, academic" than to speed up (there's certainly no semantic difference). But the preference is obviously quite strong, given the latter doesn't even occur often enough to show on the chart.

I didn't bother including quicken or hasten as per the other answer here, because they're so unlikely. (Not least because nobody talked about "protein synthesis" back in Victorian times when those verbs might have been used in similar contexts! :)

But note that in more colloquial / conversational contexts, speed up is a vastly more common "opposite" to slow down (which in academia might more often be expressed as retard, inhibit).

TLDR: The standard term is "accelerate". Forget about looking for an alternative.

speed, speed up, quicken, or hasten can be used.

2
dives into the water
0
Pejorative form of flourish
3
My shoes 'make a funny sound' when I walk
1
A verb which used to describe process of problem solving or making something good to differentiate a person involved from others?
4
What's the English word for something that given attention too much to
7
Is there an antonym for the adjective "edifying"?
2
"an idea ___ what I need to do"? (How to fill in the blank)
1
Getting cold in doing something
1
The word that describes an action to stop two people fighting