What do the phrase "Reeyan's seacrest" and the word "fraggle" mean in a sketch?

I always enjoyed the products of Kee and Peele.

"B-lake", Here is the thing. I didn't know if I'm about to ask you about this.B-lake, what club are you in.

ah part of the Spanish club.

Anybody Spanish is "Reeyan's seacrest"??

Would you big ass fraggle hair?

I am sorry I am asking 2 things in one question, but I very much appreciate if someone could support me about what these 2 words mean. ( I googled them but nothing similar ( especially about Reeyan's seacrest ) can not be found.)

I appreciate your support. Thanks.

You (are) about Spanish as Ree-on Seacrest, with your big-ass Fraggle Rock hair.

This joke makes two popular culture references: one to American celebrity Ryan Seacrest. The mispronunciation of his name is intentional, as that is what Key's character the substitute teacher is good at. The teacher is saying Blake, aka Balakay, is as Spanish as Seacrest who is American, to wit, not Spanish at all.

The other reference is to Fraggle Rock, a Sesame Street-inspired children's show. The substitute teacher is basically saying Blake aka Balakay's hair looks like this: 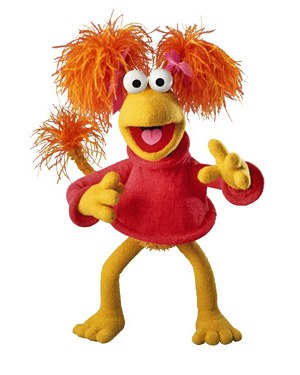 1
What exactly here is getting permeated in Maggie words?
2
Phrase "Up in the stacks". What would this phrase mean?
2
What does "Someone call the burn unit" mean?
0
What does the word "fair" in this sentence mean?