Dog Laying On Top Of A Cat; why laying, not lying? 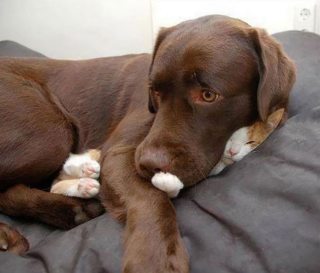 Laying on top of his throw-up.

Woman Laying On Top Of Man.

1.Laying himself on top of his throw-up.

2.Woman Laying Herself On Top Of Man.

In formal usage, yes, these should be "lying".

In colloquial usage, the distinction between "lie" and "lay" is gradually disappearing. For some speakers, they're interchangeable.

(You should still learn them both, because for most speakers they're still different, especially in formal usage.)

Not the answer you're looking for? Browse other questions tagged word-choice grammaticality or ask your own question.

6
Usage of the article 'a' and 'the' and suggestion for better wording
9
How to refer to a young woman without insulting her
5
Lying down or laying down?
3
“What” or “who”?
5
Why usually is the word “halfway” used with “down” rather than “up”?
7
Extend or extended?
4
“A man's man” and “A ladies' man”
1
Is this a correct way to use “although”?
0
What are the opposites of “put the finger in your mouth” & “stick your tongue out”?