Is there an idiom that supports the idea that "inflation is bad"?

I am thinking there could be an idiom that states that you can't just print money out of thin air and expect it to magically fix the economy? Can you think of an idiom like that? I am looking for an idiom I can use to begin my essay on inflation.

There's a saying (in American English, anyway) that is related but not quite exactly what you're looking for.

If money did grow on trees, everyone would have lots of money, and therefore a unit of that money would be worth a lot less. The decrease in value is the general concept of inflation, although the "growing on trees" bit more directly relates to inflation caused by over-printing of currency and not other forms of value loss.

I'm going to challenge your premise a bit: the consensus among economists is that a small amount of inflation is actually important for a healthy economy, and it's only high inflation that's a problem.

Therefore, I'm going to propose the dose makes the poison. It's a phrase that originated in toxicology dating back to Paracelsus, but is often used in a more general sense to refer to the idea that many things are only dangerous in sufficiently high amounts.

An idiom that's related to inflation is saying something's "not worth the paper it's written/printed on." This usually refers to contracts where one or more parties don't intend to honor the agreement, making the contract itself worthless. It can also refer to currency, meaning the monetary value represented by a banknote is less than the value of the paper itself, like in Weimar Germany when people used low-denomination bills as paper for crafts and wallpaper.

This idiom doesn't quite fit the sense you're looking for in your essay, but it could be used in a sentence to that effect, e.g. "If a government keeps printing money to fix its economy, all it will get is money that's worth less than the paper it's printed on."

The Free Dictionary has an entry for this idiom, which says:

not worth the paper it's written on
Useless; unimportant; insignificant.
Meaningless or without authority; of no value

"A nickel ain't worth a dime anymore" -- attributed to Yogi Berra. Technically, this is backwards -- we'd be concerned if a dime wasn't worth a nickel. "Not worth a dime" is often used to mean "of negligible value".

A web search turns up a couple of song titles: "A dollar ain't worth a dime" and "A dollar ain't a dollar anymore" http://www.folkarchive.de/dollar.html https://www.youtube.com/watch?v=b-tvOb5nUiA

I don't know if there is an idiom that can "explain" what you are trying to, because the problem seems to me that people don't understand how inflation works, so they won't be able to relate it to anything. What you need is an analogy to help them understand it.

Here's something I have come up with, bearing in mind I am not an economist:

Imagine that you are the owner of a rare breed of animal. There are only a handful of this kind of animal in the entire world. How much do you think that animal would be worth? A lot, because it is so rare.

Now imagine what would happen if somebody set up a breeding operation with two of the other remaining members of this animal species. Within a few years they manage to breed hundreds, which then in turn breed with each other and create thousands more. The more animals that breed, the more offspring they have, and the faster the population of these animals grows.

How much is your animal worth now? Not much, because it isn't rare anymore.

The country in which you live has a net worth that is not valued by the amount of paper money changing hands within it, but the value of its assets minus its liabilities. Every coin, every banknote represents a percentage of that net worth. Printing more money only devalues the money in your hand, because now each coin and note represents a smaller percentage of the net worth.

Inflation is like the increasing population of your "rare" animal. If you don't want it to stop being valuable, it has to be controlled. Once it gets a little bit out of control, it spirals out of control further, and faster.

I've thought of another, shorter one:

Imagine your country's net worth is a cake. Every banknote represents a slice of that cake.

The only way to get more slices of cake is to cut those slices smaller. Sure there are more slices to go around, but everybody is getting less cake.

The only way for everyone to get more cake is to make the cake bigger. And if you want more people to get the same amount of cake, the cake has to grow proportionately to the increased amount of slicing.

Printing more bank notes does not make the economy grow any more than slicing up the cake more makes the cake bigger. The only way to do that is for the country's net worth to grow - through trade, building assets, and reduction of the national debt.

You can't make a silk purse out of a sow's ear.

The silk purse is fixing the economy.

The sow's ear is the problem, here, inflation.

2) “Inflation is when you pay fifteen dollars for the ten-dollar haircut you used to get for five dollars when you had hair.” Sam Ewing

There are others but these are two that I liked.

"You can't just rob Peter to pay Paul print money out of thin air and expect it to magically fix the economy."

rob Peter to pay Paul
To incur a debt in order to pay off another debt.
– American Heritage, TFD

People used to say {in the USA}: "Solid as a dollar". This implies the dollar should be solid, which of course strongly implies that inflation is bad. As someone else said: "Imagine if a yard [or meter] were always shrinking, all the time. It would be very hard to measure things!"

People understand that one form of money printing, namely counterfeiting, is harmful and destructive, and in hard-money circles at least, one will see the notion expressed concisely as

In other words, the state or the state’s central bank creating money out of thin air is no less pernicious than when petty crooks do it.

Similar is the statement

The Fed has the monopoly on Monopoly money.

The Fed refers to the Federal Reserve, the U.S. (and arguably global) central bank. Monopoly is a board game in which players buy and sell properties, starting out with colorful but clearly worthless bills that have value within the game only.

When a member of the Federal Reserve Board of Governors, former Fed Chairman Ben Bernanke stated in a 2002 speech

so lampooning someone, as Bernanke was in parts of the American press, as Helicopter Ben is an insulting putdown of a ridiculous idea. 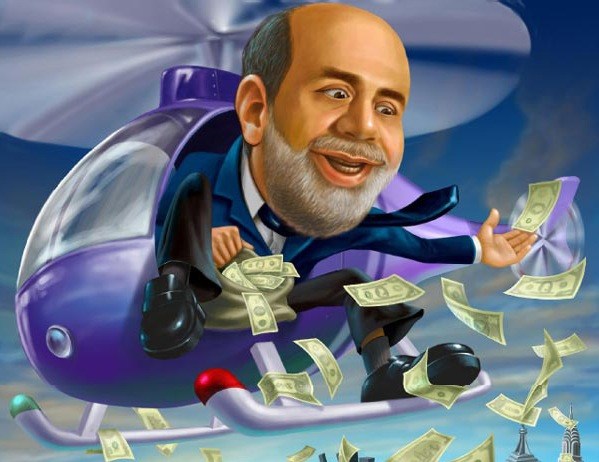 More broadly about any bald assertion by a politician in plain contradiction to fact, someone might allude to the Hans Christian Andersen tale along the lines of

The Emperor is wearing no clothes!

or with biting irony as in

An elected official, political appointee, or judge in flowing black robes running her mouth, spouting off, or talking out of his rear end (of which the last is both informal and slightly crude) does not make it true in any sense, and the connection to the Emperor’s new clothes states that people who play along are fools or sycophants.

The Emperor’s new printing press is a truly magical device! Why, who would have ever believed that all our problems could be solved by merely printing more money?

Not the answer you're looking for? Browse other questions tagged idiom-request .