What does the broken bell wire signify here?

"I have seen those symptoms before," said Holmes, throwing his cigarette into the fire. "Oscillation upon the pavement always means an affaire de coeur. She would like advice, but is not sure that the matter is not too delicate for communication. And yet even here we may discriminate. When a woman has been seriously wronged by a man she no longer oscillates, and the usual symptom is a broken bell wire. Here we may take it that there is a love matter, but that the maiden is not so much angry as perplexed, or grieved. But here she comes in person to resolve our doubts"

- Sherlock Holmes, A Case of Identity

Here, Holmes says that if a woman is seriously wronged, the result will be a broken bell wire. Now from all I can gather from the internet, "bell wire" just means an electrical cable commonly used in doorbells etc. I have to infer that a "broken bell wire" either means one that has been deliberately broken or it symbolically means that the bell has been rung incessantly. I would assume that the bell wire referred is Holmes', indicating that the woman is furiously clicking on Holmes' Bell. Is this inference correct?

The 'bell wire' is not any kind of electrical wire. It is a rigid solid wire, connected at one end to a knob which protrudes from the house wall, by the front door, and at the other end, inside the house, to a bell. When the knob is pulled, the wire, being rigid, pulls the bell, and it clangs. An angry person might pull the knob so hard that the wire breaks. This type of arrangement was common in the 19th century in Britain. 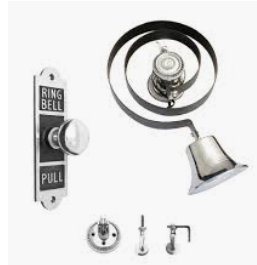 Literally bell wire is what you say, the kind of wire used to join the bell-pull (a handle) by the door to the bell inside the house. In the stories, 221 Baker Street has a mechanical bell, as can be seen in The Adventure of the Beryl Coronet, where a visitor "pulled at our bell" in the opening. (In later times, "bell-wire" refers to the kind of wire for electric bells.)

In this context it seems a little ambiguous and might mean:

Initially I read it as the metaphor, but thanks to comments I now think it means the first, literal, sense -- which is along the lines of many sayings in English about the anger of a scorned woman.

("Oscillate" is an unusual word for this kind of movement, today we might say "rocking" or "moving backwards and forwards". I don't know if it was unusual in the period.)