I wonder if we can say "two to the three" to indicate 2 to the 3rd power.

Here are my attempts to search on Google for it: 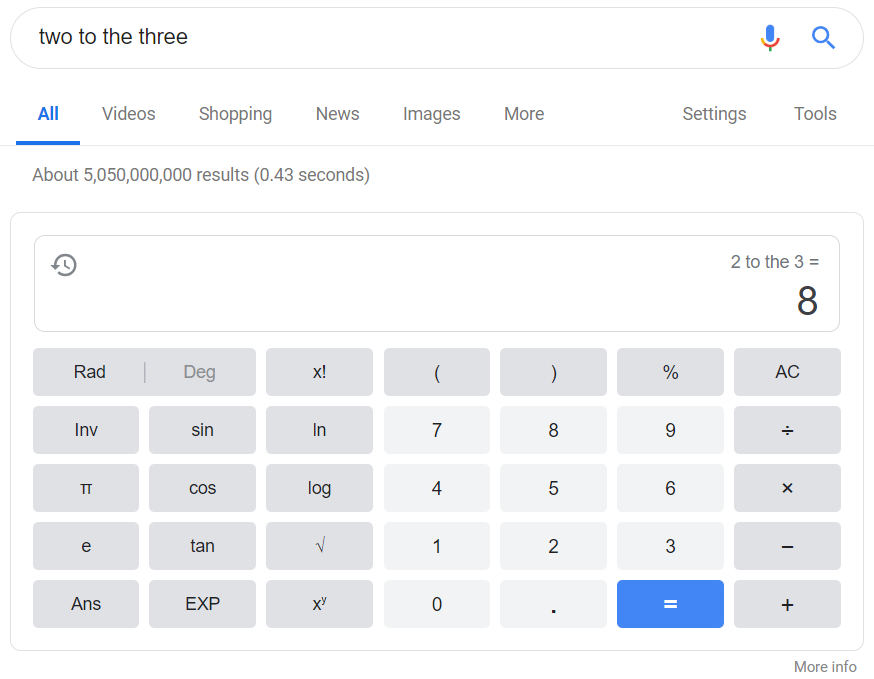 And "two to the third" seems also OK:

Which one do you usually use?

There are three ways to express your phrase:

I would always describe that in words as

I would never say

Two to the Three

Two to the power of three.

And as a person who majored in physics in college, and has been a software developer for several decades, I have had occasion to discuss raising number to powers many many times. I have never heard a native speaker who knows math say "Two to the three". When the exponent is not a whole number and does not nicely form an ordinal (like first, second, third, fourth) I would say

Two to the power of four point three

E to the X

E to the power of X

Not the answer you're looking for? Browse other questions tagged phrase-usage mathematics or ask your own question.

9
“The same name” vs “a same name”: what's the difference?
7
one size bigger
2
More common - two weeks vs three weeks
1
English fraction ex) one third etc
0
The country of China VS The country China
0
Can we use “for example” when we want to give two or three examples?
2
Married and two beautiful girls
0
Using “I wanted to know (I was wondering)” instead of “I want to know (I am wondering) ”
0
“the shadow of a doubt” or “a shadow of a doubt” or “shadow of doubt”