Is there a word for a man who behaves like a woman?

Does there exist a word which describes someone who is male but behaves like a female? In Chinese, we say that "他很 (He is so) 娘". Such guys may have the following features (include but not limited to): 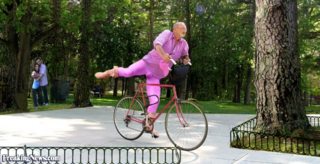 Any words in English describing the above men with those features which seem strange to me?

The English adjective to describe a man or boy whom the speaker/writer regards as exhibiting stereotypically or inappropriately feminine characteristics is "effeminate."

Please note that this word should be used with caution, if at all, as these days it is often seen as offensive. Also, please note that what specific characteristics are seen as "effeminate" can vary widely across different times and cultures, and even from one individual to another. Wearing pink, being emotional, and gesturing with one's fingers are by no means universally coded as "feminine," and therefore will not always be seen as "effeminate" when done by a man.

Effeminate, an adjective that means "having feminine qualities untypical of a man; not manly in appearance or manner."

Nanigashi makes an excellent point about the cultural and temporal boundaries that limit the applicability of categorizing particular behaviors as feminine or masculine.

There is also androgynous: partly male and partly female in appearance; of indeterminate sex, which is not quite the same thing of course.

A less derogatory, more politically correct term, that no one has mentioned yet is: metrosexual. Although a metropolitan sexual describes a man who is just more particular about grooming and cleanliness.

I am thinking of sissy (adj.), a pansy (n.), unmanly (adj, to describe one's behaviour). Keep in mind they all are derogatory.

In a modern and broad-minded society, having nails painted, or wearing a pink outlandish suit, or getting overly emotional doesn't necessarily describe a woman.

Another option is camp (adjective), meaning to behave in a way stereotypical of a gay man (in Western culture). This includes exaggerated feminine traits, but also some traits (mannerisms, walk, accent) unique to the gay male subculture.

Note that gay itself could be an option, if you genuinely think they are homosexual. However this has also been used as a general insult/criticism without necessarily being related to sexuality. "That's so gay" implies that you think something, or something someone is doing, is bad/stupid/lame/dumb. Katy Perry wrote a song about an ex-boyfriend called "Ur so gay (and you don't even like boys)" which made the intent of the insult clear. This use is generally offensive to gay people, of course, because it originates in accusations of homosexuality being used as insults, and then became a more generic insult in the 1990s when homosexuality became less taboo.

It also reminds me about an expression used by the former Governor of California, Arnold Schwarzenegger: girlie man.

There is also gender bender, a quite catchy term which seems to fit your examples shown. It implies a more conscious effort of the person thus described, perhaps even a level of activism or show, as opposed to the purely descriptive effeminate which can be entirely unconscious.

Since identity and in particular gender issues are "mined territory" Graham has a point: As this reddit discussion shows the term can be perceived as inappropriate, for example exactly because it implies a level of activism. Understandably gender-fluid people (I hope I'm not insulting anybody) are loath of being categorized, so it's prudent to tread carefully in this context; using the rather benign gender bender is no exception.

Depending on the specific behaviours and the cultural context, a man could be described as being feminine as opposed to effeminate. Both are valid, but effeminate is more derogatory, suggesting that the speaker thinks his mannerisms are in some way inappropriate, offensive, affected, or possibly even insulting to women by performing an exaggerated caricature (this is when effeminate crosses over into camp). A man who performs some "stereotypically female" behaviours in a more naturalistic, less exaggerated way, could be correctly described as feminine without being effeminate.

In addition to the terms in the other answers, more neutral terms are "female presenting" or "non gender binary", "gender nonconforming", and "non-gender normative".

3
A word meaning “a man who leers at women”
0
A possessive / jealous man / woman and a person who lacks these feelings
1
A word for a man who doesn't get upset about his wife's relationships
3
Is there a word for a person who's like this?
2
A neutral word for someone who behaves differently from everyone else
1
What word describes the woman who behaves like the man?
0
a young woman who is pregnant
1
a man and a woman
0
What do you call a man who has a sexual relationship with a married woman?
0
Is there a word describing woman's action who behaves cute, and tries to charm a man?