Preposition AT, IN and ON usage

A lot of popular media (specifically Disney) is STRONGLY rooted in characters created by other people.

I've learned English since Elementary School, and now decades later, I'm still struggling with the proper use of prepositions. I found the example above from some writing forum. I want to know why it's 'rooted in' not 'rooted at' or 'rooted on'?

Sometimes more than one preposition can be used, and the meaning stays pretty much the same. For example:

Other times, only one preposition is idiomatic. In this case, rooted in is an expression that even gets its own entry in the Merriam-Webster dictionary:

rooted in (idiom) formed, made, or developed by using (something) as a basis
Her opinions are deeply rooted in her faith.
a dance rooted in African tradition

Sometimes there is a logical reason behind the correct preposition choice. As was said in a comment, in this case, plant roots go down into the soil, so in would make more sense than on or at. But I can see where it might be confusing, especially because of the way we say based on this, but rooted in that. 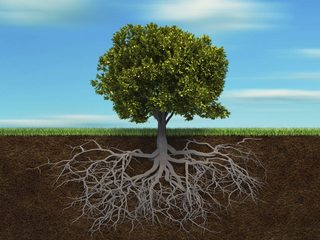 Look at the tree. Where are its roots? IN the ground, literally.

"Rooted at" or "rooted on" would be wrong because of the roots of this particular phrasal verb ;-)