What exactly is a suit of armor?

The two pertinent words are easy enough to understand:

But the thing that has me feeling uncertain is that google images or whatever of "suit of armor" shows some ridiculous ancient clattery thing which I cannot picture in use on a modern-day battlefield. Can you describe what these men are wearing as a suit of armor? 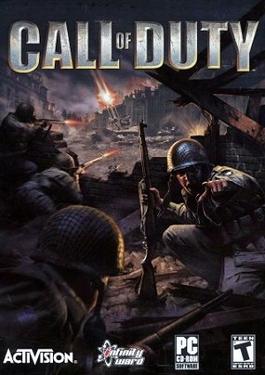 There are many kinds of armor. As a general term, it refers to anything worn to protect the body against violent injury. Up until the middle ages, armor came in pieces that protected the most vulnerable parts of the body -- the chest, head and waist, and sometimes the arms and lower legs. As an example, this ancient Greek hoplite armor: 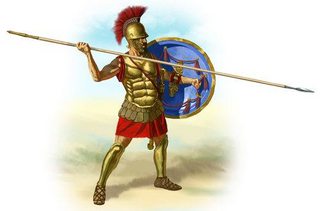 This can be referred to as a "suit" of armor, as the various pieces are fairly standard. However, most of the time the phrase refers to something that looks like this:

After the invention of gunpowder, this kind of "full plate armor" became ineffective and fell out of use. For a while, certain soldiers (such as the French Musketeer or the Spanish Tercio) still wore a metal helmet and a cuirass, with perhaps some arm protection, because they could expect to engage in hand-to-hand combat. 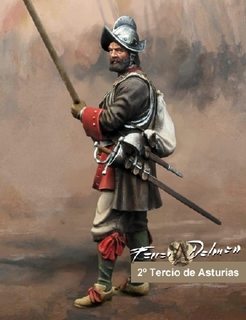 Again, this outfit could be called a "suit" of armor ... but because it's little more than clothing, and professional armies like these wore outfits that all looked the same, today we would call a uniform.

Long story short: The men in your picture are wearing uniforms. Aside from the metal helmet, they are not wearing armor as such. The distinctive shape of this helmet identifies them as American General Infantry (GI) soldiers, most likely from World War II.

The modern soldier naturally also wears a helmet, but in addition they wear a kind of armor, consisting of ceramic plates inserted into a Kevlar vest. There are many variations on the design: 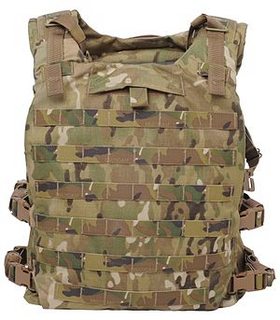 This would not be called a "suit" of armor, but rather part of the soldiers uniform, or part of the uniform's accessories. In general, each military service has a specific name/abbreviation for the whole ensemble (the uniform and all its accessories).

Side note: In a military context, "armor" usually refers to "armored vehicles" like tanks. Armor that is worn is referred to as "body armor". Specialized military and police units can wear "full body armor" that (more or less) protects their entire body, but this is considered too heavy/bulky for normal combat operations.

All it means is that the armour isn't just one bit, it's the full package. A suit of armour is head to toe. Usually, it's refers to medieval type. Here is an example. I'm not sure why you were having an issue with googling it! Here is a wiki link you may also find useful.