The remaining parts of an ancient city

What do you call the remaining parts of an ancient city like what you see within the picture that sometimes archeologists discover and unearth?

To me they both work, but I am sure there is a fixed term to it. Also, I wonder if there is a better choice. 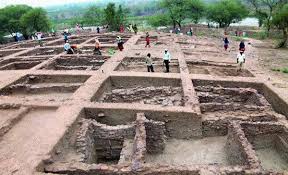 Cities do not have remnants. Remaining parts of something does exist in general but is not an archaeological term per se.

Remnants is a word applied to objects. Not a site.

The proper term is remains:
"Sites may range from those with few or no remains visible above ground, to buildings and other structures still in use." [Wikipedia]

"Remains" certainly may be used, but it's common to refer to these as "ruins".

High on top of a hill overlooking Athens stands the proud remnants of four of the most well-known ruins preserved from the ancient world. The iconic Parthenon, Propylaia, Erechtheion and the temple of Athena Nike make up the Acropolis of ancient Athens.

[The ancient city of Delphi] was also the location where the oracle of Delphi was filled with the spirit of Apollo and asked for guidance. Today, numerous ruins from the city remain

Under the Romans, [Corinth] continued to prosper, which explains why the most interesting ruins to view here are of Roman build.

Today Caesarea is a popular ancient archaeological site boasting extensive and well-preserved ruins. Its most impressive structure is the large and picturesque ancient theatre, which overlooks the deep blue ocean.

Perched atop an isolated rock plateau on the eastern edge of the Judaean Desert, overlooking the Dead Sea, the ancient fortress of Masada is one of the world’s most beautiful ruins.

Formally, instead of "ruins", these may be referred to as "sites of archaeological interest", or something similar.

Not the answer you're looking for? Browse other questions tagged word-usage word-choice word-request word-difference or ask your own question.

1
Some facial beauty standards
2
Boulevard usage and parts
3
What do you call a team which it's players play in a very coordinated way?
2
What do you call this place where various goods are sold?
0
What do they call that case that they cover a piano with?
0
“Interdependant” vs “Correlative”
0
What do you call people who control the order at tourists attraction sites
21
What is this “opened” cube called?
0
“there are no special names for each city”