What do you call the walking lanes in lecture rooms? 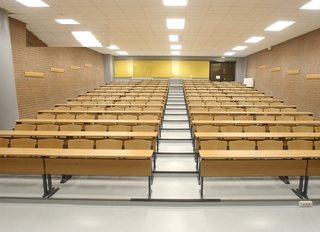 This (and any similar "lane") is usually called an aisle (pronounced "eye-ll"):

Carelessly tapping away on her cell phone as she entered the lecture hall, the student stumbled off of the top stair of the center aisle, and might have fallen headfirst all the way to the bottom if her friend hadn't caught her by the arm.

Side note: The etymology of "aisle" is a definitive illustration of why English spelling is so bizarre. "Aisle" originally derives from the old French ele (wing) from the Latin ala (presumably from the way it separates the people in a large room like the wings of an army). So far, so good.

At some point in the 15th century, "aisle" became confused with the Middle English "ile" (island), and, some time after, both gained a silent "s" (possibly to re-associate "isle/island" to the Latin insula). Shortly after, "aisle" gained an "a" to match it with the updated French spelling aile.

2
The lightning struck the hut and set it alight or set it on fire?