What do you call the angle of the direction of an airplane?

The pilot changed the tilt of the aircraft nose by pushing the joystick forward. 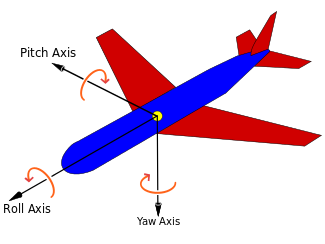 I believe these are the appropriate technical terms, and more can be read here. But an airplane has 3 angles that can vary, but the one you are specifically referring to is pitch.

The closest dictionary defintion I found was in CED:

the amount of slope, especially of a roof

The direction that an (air)plane or a (sea)ship is pointing to is called heading:

The direction that an (air)plane or a (sea)ship is moving is called course:

"Heading" and "course" are expressed in cardinal directions (i.e. "north/south/west/east") or degrees of rotation relative to the north (e.g. "heading 90 degrees" and "heading east" are synonyms). These are measured on a horizontal (geometric) plane, (i.e. a surface which is perpendicular to the direction of gravity).

The "up/down" direction that an airplane is pointing to relative to the horizontal plane is called pitch angle:

The pitch axis [...] has its origin at the center of gravity and is directed to the right, parallel to a line drawn from wingtip to wingtip. Motion about this axis is called pitch.

The "up/down" direction that an airplane is moving relative to the air around is called angle of attack:

[...] the angle between a reference line on a body [...] and the vector representing the relative motion between the body and the fluid through which it is moving.

The "up/down" direction that an airplane is moving relative to the ground is called angle of climb:

The angle of climb can be defined as the angle between a horizontal plane representing the Earth's surface and the actual flight path followed by the aircraft during its ascent.

Note that the angle of climb depends on the ratio between horizontal distance traveled and the change in altitude, which is usually relative to mean sea level (I say "usually" because there is more than one way to define what "zero altitude" means).

You may be looking for the word attitude, which is the orientation of the airplane in all three axes (pitch, roll, and yaw). Pitch is the nose up/down angle of the plane, roll is the bank angle of the wings, and yaw is the nose left/right angle.

Note that this should not be confused with altitude, which is the height of the airplane either above sea level or above the the surface over which the aircraft is flying.

Depending on how technical you want the word to be, you might also want to use Angle of attack. This angle is the angle of the plane relative to the fluid(air) through which it is moving. While the word is usually applied to the wings themselves, it does also apply to whole crafts. See https://en.wikipedia.org/wiki/Angle_of_attack for a more complete/correct explanation.

The direction that an aeroplane is pointing in is called its heading. However, if there is wind blowing from the side, the actual direction the plane is travelling in will be slightly or significantly different from its heading, depending how strong the wind is.