I came across this joke on the internet:

A three-legged dog walks into a bar and says to the bartender, 'I'm looking for the man who shot my paw'

It is meant to be a "dad joke" but I don't understand it. What does it mean?

The meaning of "paw" is an animal's foot, it sounds like "pa" (an informal word for dad/father).

In cowboy movies, back in the 1940s-50s, there was always the good guy and the bad guy. The bad guy would nearly always be an outlaw, a bandit, a notorious gunfighter or a corrupt sheriff. The movie audience would know him by his black cowboy hat. The good guy, would often be a person who had suffered a wrong in the past.

At the beginning of the movie, the bad guy would burst into the saloon and announce dramatically to the patrons of said bar: I'm looking for a man named McCallister. Does anyone know where he is? Cue scrambling of tables, chairs scraping and crashing onto the ground as people fled from the inevitable gunfight. 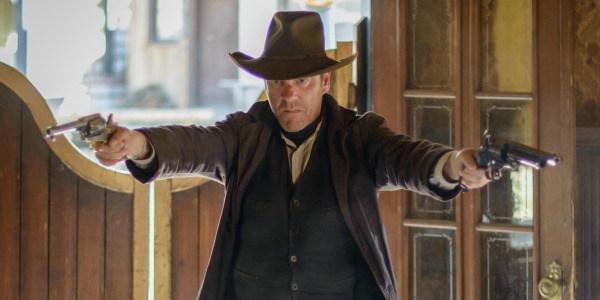 The pun plays on this well-known trope and on the stereotypical American drawl; the vowel in "pa" and "paw" would be drawn out, i.e. /pa:/ and /pɔ/, the latter of which is only similar to the British English pronunciation /pɔː/ but close enough so that everyone gets the joke.

Paw is a non-standard way of saying father, used in certain parts of usually rural areas.

But obviously a three-legged dog is missing one of his "paws", hence the joke.

Not the answer you're looking for? Browse other questions tagged idioms jokes .

210
How does the "Dalai Lama walks into a pizza shop..." joke work?
8
Meaning of "keep your worms warm"?
49
Meaning of "Sue me"
2
Why does a grasshopper say that an eponymous drink is named 'Norman'?
3
What does the idiom 'to give someone away' mean in A Guide to Second Date Sex?
9
What is the joke in this context? (a "spring" in my step)
1
How to say I need to smoke cigarette too much just because you have not smoked for a long time in AmE
5
"I don't even know what comedians read! Comic books?!" What does this joke mean?
0
What does reach across the table mean in this context?