As he came within 20 feet of an officer - meaning, understanding

The shooter apparently walked into a building and began firing a .45-caliber semi-automatic pistol. He then got into a vehicle and continued firing before entering another building.

He was eventually confronted by military police in a parking lot. As he came within 20 feet of an officer, the gunman put his hands up but then reached under his jacket and pulled out his gun. The officer drew her own weapon, and the suspect put his gun to his head and pulled the trigger a final time, according to Lt. Gen. Mark A. Milley, senior officer on the base.

How do you understand the line that's in bold? Specifically, I'm interested in understanding it grammatically, plus visualization of the process. For instance, how do you imagine the idea of coming within a certain number of units of someone or something?

came within 20 feet of an officer

he was less than 20 feet of the police officer.

Imagine it like when you come inside the radar area where the guards can see you on Metal Gear Solid: 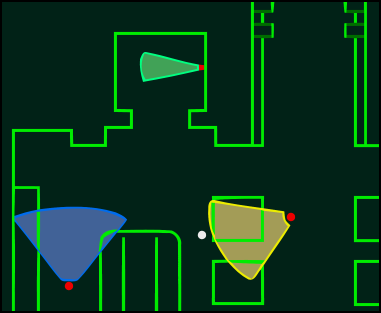 In this example the white dot was probably within 20 feet of at least one of these guards, even though they may not have seen him.

Not the answer you're looking for? Browse other questions tagged adverbial-phrases .