Is there any difference between "along" & "by" the river"?

Is there any difference in meaning between those two sentences concerning the use of (along) vs. (by)?

1- Cities must have water, and so they are often built along rivers.

2- Cities are built in safe, suitable places, such as by rivers.

Can they be equally replaced?

1- Cities must have water, and so they are often built by rivers.

2- Cities are built in safe, suitable places, such as along rivers.

If we want to thoroughly split hairs, I suppose we could come up with a slight difference. 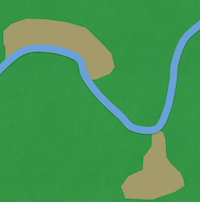 However, most of time time, people won't think that much about this subtle difference. And nobody would argue that the northern city is not by the river, because clearly it is.

Also, in a practical sense, most cities probably take up enough riverfront land that it would be very hard to find an example of a city that would be considered by a river but not along the river.

Yes in this case along and by are interchangeable

Along or alongside can be used when the meaning is next to.

by can be used as a preposition, adverb meaning near or beside(in distance)

If you need to reference all are available in the Cambridge English Dictionary online Link to C.E.D.

Yes, there can be a difference, but note that they can be used synonymously.

According to the Merriam-Webster ESL Learners Dictionary, which is found here:

1 : in a line matching the length or direction of (something)

They have a house along [=alongside] the river.
We drove to Boston and we stopped along the way for lunch.

She was standing by [=beside] the window.
His wife was sitting by him.
They have a house by the lake.

So, along rivers can mean matching the length of rivers, and by can mean near. Your example sentences cannot be equally replaced.

Not the answer you're looking for? Browse other questions tagged word-usage meaning-in-context word-choice .