I was answering a question on StackOverflow, I wrote a code snippet and provided an example of how that piece of code should be used.

I was going to write

Here's an example of usage

Then I was wondering if I could put "use" instead "usage"

Here's an example of use

What I was trying to say is

I looked up the definitions, I googled them, but I am still not sure which one is correct and whether they both are acceptable in this particular situation.

This ngram brought nothing but more confusion. See that surge? What does that even mean? 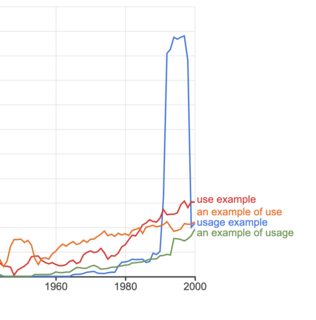 Could you please clear it up for me?

The trick here is to realize that "usage" is a noun, and "use" is a verb, therefore they can almost never be used in the same place as the other one would.

Moreover, "use" is a transitive verb, which means it must always have an object to act on of some kind. You can't just "use", you have to "use something".

So in the case of examples:

Here's an example of usage

is correct, because you need an example of some thing, and "usage" is a thing (noun)

Here's an example of how to use it

Here's an example of use

Is not correct, because "use" by itself is an action (verb), not a thing (noun).

(It should probably be noted that there is a sense where "use" can be a noun, in the sense of "a use for something", but this is only really ever used with the "for something" part on the end, and is not really the sense of "use" you're working with here)

... A little enhanced version would be

... An enhanced version would be:

Not the answer you're looking for? Browse other questions tagged word-usage word-choice word-meaning difference .

2
Why is “I have learnt English since 2 years” incorrect?
0
"show up" phrasal verb
1
Type of usage and accuracy
0
"Road" when referring to an unphysical thing
2
Does "floor" mean "right to speak, time to speak"?
3
"Offend" vs "Insult"
0
Left Vs Left over
2
What does "How do you find life in Japan?" mean?
1
"Affect" / "Impact" / "Influence"
2
Intonation vs Inflection