By "bug in a movie" I mean a scene where an inconsistency (in dressing, the plot, the logic of the story, etc.) is exposed to the audience. I'll give some examples.

You could call that a "goof" (this is the word used on IMDB) or a "blooper" (though this is usually an acting error that gets cut from the show). More particularly you can talk about "continuity errors", "anachronisms" or "plot holes".

A "goof" is a general mistake in a film. A "blooper" refers more to a mistake made by an actor, or things like malfunctioning props, defective set pieces, and deliberate jokes and pranks. The main thing they all have in common is they are obvious when they happen and they interrupt the scene. You have a "blooper reel" which is a reel of film which contains the most amusing mistakes made. "Continuity error" is an inconsistency; it could be in story or a physical mistake, but it's where one thing is established and then another thing is shown later. An "anachronism" is a later invention in a film set in an earlier time. A "plot hole" is a problem with the story; for instance characters missing an obvious option to solve their problem without trouble, or an illogical/impossible event.

You can just talk about mistakes or errors. There doesn't have to be a special word.

I think that the term that you're looking for is continuity error.

According to the Wikipedia:

In fiction, continuity is consistency of the characteristics of people, plot, objects, and places seen by the reader or viewer over some period of time.

Most continuity errors are subtle and minor, such as changes in the level of drink in a character's glass or the length of a cigarette, and can be permitted with relative indifference even to the final cut. Others can be more noticeable, such as sudden drastic changes in appearance of a character. Such errors in continuity can ruin the illusion of realism and affect suspension of disbelief.

A similar question was answered in our sister site.

@JamesK has pointed the word goof. According to the Wikipedia:

In filmmaking, a goof is a mistake made during film production that finds its way into the final released picture. Depending upon the film and the actual scene, the goof may have different effects: a loss in realism, an annoyance, or it could just be funny. It is often a type of continuity error. Goofs are also known as "bloopers" or "mistakes".

You can read more about the types of goofs in the linked page. 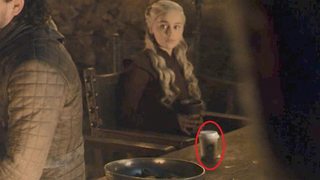