What do you call these platform or large support building that sports a huge cannon? 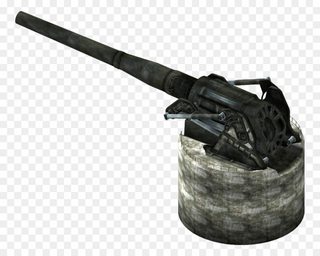 What do you call these platforms or large support buildings supporting a huge cannon? I heard the words base and turret being used, but I am not sure if it specifically refers to the base building. In the picture it's made of concrete, and the cannon sits on top of it. Is there a name for such buildings?

This is a gun emplacement for which Lexico has

1.1 A platform or defended position where a gun is placed for firing.

Another term for it is a battery. Lexico gives

2 A fortified emplacement for heavy guns.
To this day, a casual walk along the Normandy coast reveals scores of entrenched batteries and nearly monumental emplacements of concrete.

The term can also refer to the guns themselves.

At five o'clock, a convoy even brought a heavy missile battery.

A historical term for a gun emplacement is bastion. Lexico gives

1 A projecting part of a fortification built at an angle to the line of a wall, so as to allow defensive fire in several directions.
The walls had rounded angles with semicircular projecting bastions for artillery with an entrance on the south side.

This word was in use from the days before cannons, when the bastion was shaped to allow archers to shoot at intruders. These fortifications evolved to take cannon and artillery.

The term bastion is included in An Illustrated Glossary of Castle Architecture.

Although these are more commonly used for statues, I believe you can still use them for a canon base:

A pedestal or plinth is the support of a statue or a vase.